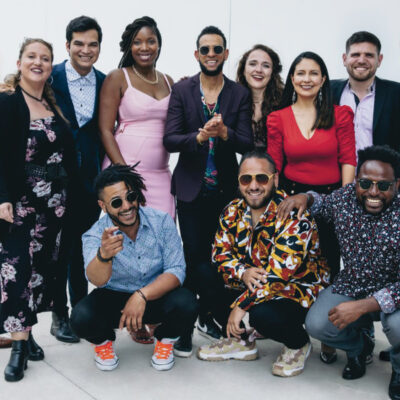 back to list
People of Earth is a global music collective set on blurring the barriers between the great art forms of the terrestrial sphere, creating an explosive blend of the music of Cuba, Puerto Rico, Brazil and beyond. The world class musicians who make up this collective represent more than 8 different nationalities and have played with a vast range of artists from Gloria Estefan to Ruben Blades to the New York Philharmonic and more.

People of Earth has performed at such venues as The Kennedy Center, Brooklyn Bowl, Penn’s Landing, World Cafe Live, The Bitter End, The Highline Ballroom, Drom, SOB’s, and Rockwood Music Hall in NYC. They also performed as headliners for Philadelphia’s SugarCane Festival and at the legendary Painted Bride and was recently featured on latin music channel Congahead Studios. In 2020, People of Earth was awarded a grant from New Music Usa to commission Dafnis Prieto to compose a concerto for orchestra, to be premiered by Louisville Orchestra, Britt Orchestra, New World Symphony and Los Angeles Philharmonic in 2022.