Meet the Vinyl Ambassador & Collector behind Paradise of Replica

Paradise of Replica sells records from its perch overlooking the bustle of Grand Street in Chinatown. The owner, Kyle Molzan, opened this welcome oasis of music last November. I talked with Kyle one day about what makes the store tick.

Kyle Molzan: Anybody that finds the store is happy. I looked around at so many spots. Anything that was on the second floor was kind of the only thing in my price range.

What were you playing just now?

Tell me a bit about what you have.

KM: Basically everything. It’s mainly a used record store. I do have some recent things that get put out, new bands and reissues as well. But overall, it’s rock, jazz, experimental music, folk music. I got like eight different genres, I guess. I have a lot of synthpop. That’s kind of my main specialty. Ambient music and synthpop, I feel like I have a little more of than most stores. Right now I have a ton of Japanese stuff. I always have a lot of Japanese stuff because that’s what I focused on when I first started buying records.

What made you want to open a store?

KM: I was a reviewer for Shutterstock and then that job went away during COVID. Not because of COVID, just because they wanted to make more money—they took everything to India. So I just wanted to do something that I had an insane passion for. A lot of my family told me, “You’re not really interested in keeping the records as much as telling people about the records.” So finding records and selling them was a way to expose people to music that might be a little less known because it’s from around the world. It was a job that I would be more than happy to do. Listening to 10 records a day sounds fine to me. As long as it’s still a business that makes money. 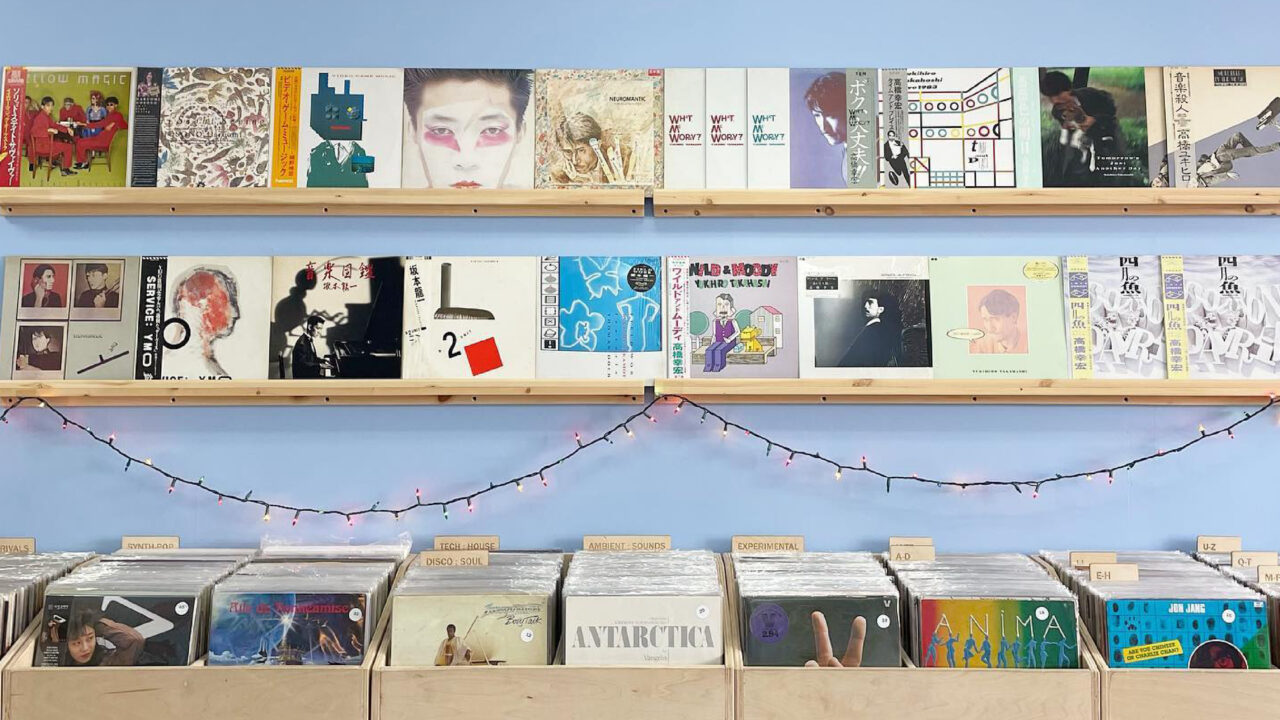 Did you like to go to any other New York record stores?

KM: Oh yeah. A-1 and Other Music were probably where the majority of my collection came from over the years. I worked at Kim’s Video for a little bit, so every day on my break, I would just do a run of five record stores and then come back to work. Just to see everybody’s new arrivals and stuff.

KM: The very last one, on Avenue A.

I used to go to Mondo Kim’s. They had a deal where you pay $1 to rent if you return it the same day. I’d rent three videos for three bucks.

Oh, yeah, this has a Budd Boetticher interview. What’s especially rare that you have?

KM: I bought Richard Kern’s record collection. So I still have a lot of records from him. I have his tapes from when Henry Rollins would record sets at CBGBs and give him a tape. So I have a Beastie Boys live thing, and Bad Brains. And a Misfits show that was recorded from the radio on a cassette. And Larry Gottheim’s collection was really amazing. He’s a structural filmmaker. I have some Korean stuff right now that I don’t think anybody has or knows about.

Where do you get the Korean records?

KM: I had a friend in Seoul and I sent her a list. It became this thing where she would go to every record store and be like, “Here’s a list. Can you help out at all?”

Do you want coffee? I have an espresso machine to make coffee for friends.

Thanks. So does Richard Kern come through here at all?

KM: He comes by sometimes but it’s been a minute. He spends a lot of time photographing naked ladies, so… He’s still a cinephile though.

I also have a lot of Scandinavian stuff, because my brother-in-law is Danish. I’ve also visited Copenhagen and Japan. I  went crazy buying there. When you’re actually in a place [buying records], you can do some damage.

It’s getting to be time for lunch. Where do you eat?

KM: Everywhere. I mean, Kitchen Cô Út is the best thing that’s opened up in a long time. You get a full meal for five bucks, in and out, perfectly great. I mean, I used to do all the Vietnamese things around here. But now Kitchen Cô Út on Chrystie is the best I’ve ever had.

You’re right in the thick of things here.

KM: Yeah, location-wise it worked out better here than most spots. This giant tree [outside the window] is really beautiful to hang out with. I mean, it’s been word of mouth and people Googling record stores. Now I have a sign outside. I didn’t even have a sign for a while.

Paradise of Replica (297 Grand Street, #2A) buys and sells records.

PHOTOGRAPHY Courtesy of Paradise of Replica