Duncan Hannah was a painter. He died unexpectedly on June 11, 2022, at his home in West Cornwall, Connecticut. He was watching a French film. If you knew anything about Duncan, the French film bit was perfect.

Born in Minneapolis, he arrived in NYC during the first half of the gritty, freewheeling 1970s. Before long he was everywhere, came to know everyone and was doing everything that an eager, talented and socially aggressive 20th Century Boy could do. Duncan was a lover of music and art, French Cinema, nightlife, alcohol, sex and women. Open nearly any page of his collected journals, 20th Century Boy, and find out just how much he loved all of it. With his dangerously dreamy Alain Delon-ish looks, he cut a libertine and booze-fueled swath through the scene as he rambled in and out of CBGB, Max’s Kansas City and the nether regions of downtown. Duncan was the ultimate bad boy, living life as a cinematic mashup of Warhol’s Factory and the French New Wave. He appeared in a couple of films, worked on his paintings and found himself in the thick of it, all the while chasing and being chased by icons, superstars and a new guard, who like himself, were creatively coming of age during the Punk and No Wave explosion of the mid-to-late ’70s. I’d seen Duncan around, I knew who he was and we eventually became friendly acquaintances at the Mudd Club, where I began working the door in early 1979.

Those years were nothing less than a full-on happening and Duncan Hannah was truly part of that happening. In the best sense, if you were hanging out in Downtown NYC, you were part of it too. The influx of young talent coming to the city seemed endless, while the city itself was in shambles—broke, lawless, wild and dirty, yet somehow within that swirl of a mess, it was a beautiful dream and a golden time. Rents were cheap, everyone was out late every night, taxis were easy to come by and drinks were oftentimes free if you knew how to play the game. Duncan knew how to play and everyone who crossed paths with him wanted a piece of his talent—to get close to the cool, sexy vibe that was Duncan Hannah.

When the ’80s rolled in, Duncan regrouped and was soon on his way to becoming a successful, respected and well-connected artist. His career as a painter took off and his work found its way into the hands of friends, private collections, galleries and museums including the Art Institute of Chicago, the Minneapolis Institute of Art, and The Metropolitan Museum of Art.

Now more than two decades into a 21st-century world, I’ve asked several friends and contemporaries, who came to know him in their own way, to answer a question, offer a memory or write a few words about Duncan Hannah. 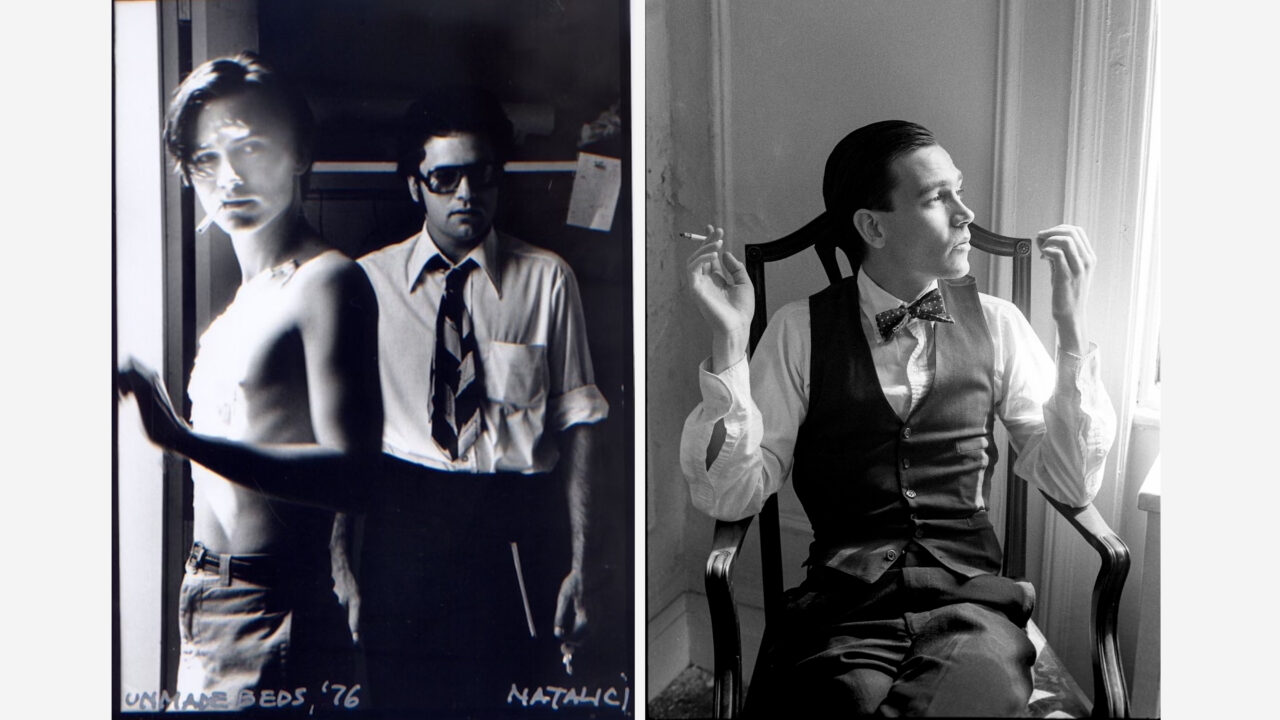 Richard Boch: Hi Amos. Tell us about meeting Duncan and how you chose him to appear in two of your films—Unmade Beds (1976) and The Foreigner (1978). Was the King Bag character in The Foreigner written with Duncan in mind? Was he the perfect Rico?

Amos Poe: First, I miss Dunc, his voice, his humor and intelligence, his mid-western elan. His landline (no longer in use) I still remember—212-595-6878. I must’ve called it a thousand times. It’s the only landline I remember.

I met Duncan on assignment for The New York Rocker in 1976. Largely due to our obsessions with Godard and French cinema, he and I hit it off instantly. I had the idea for my first feature, an homage to Godard’s Breathless titled Unmade Beds—I wanted to re-invent the Nouvelle Vague in New York but hadn’t met anyone who fit the bill for the lead. The second day we hung out I asked him to portray Rico. “But Amos, I’m a painter, not an actor!” he said, “That’s okay, I’m a filmmaker, not a director.” He was more than an actor—he was the movie itself, its soul. Everything spun around Duncan; he was also its art director. Duncan and Eric Mitchell bonded on Unmade Beds and when it was time (1977) to make The Foreigner, which revolved around Eric, I thought Duncan would be perfect for Eric’s drunk and out-of-control nemesis: King Bag. The following year, I had an idea to make a third film, The Gay Mortician, to complete the trilogy. The film would star Patti Astor as a desperate and lonely Bohemian mortician who creates the perfect men, two monsters (Duncan and Eric) from cadavers she pieces together. It was to be a musical but it never happened. I told Duncan this idea, Guys and Dolls meets Frankenstein—and he replied “But Amos, I can’t dance.” to which I responded, “That’s okay, it’s not Nureyev, it’s Sinatra.” He got a twinkle in his eye, “Oh I see. A comedy of bad manners. When do we start?”

That’s Duncan Hannah to a tee—inquisitive, gentlemanly, handsome, attentive, discerning and always ready for a laugh and a good time. One of a kind. We won’t see one such as him any time soon. 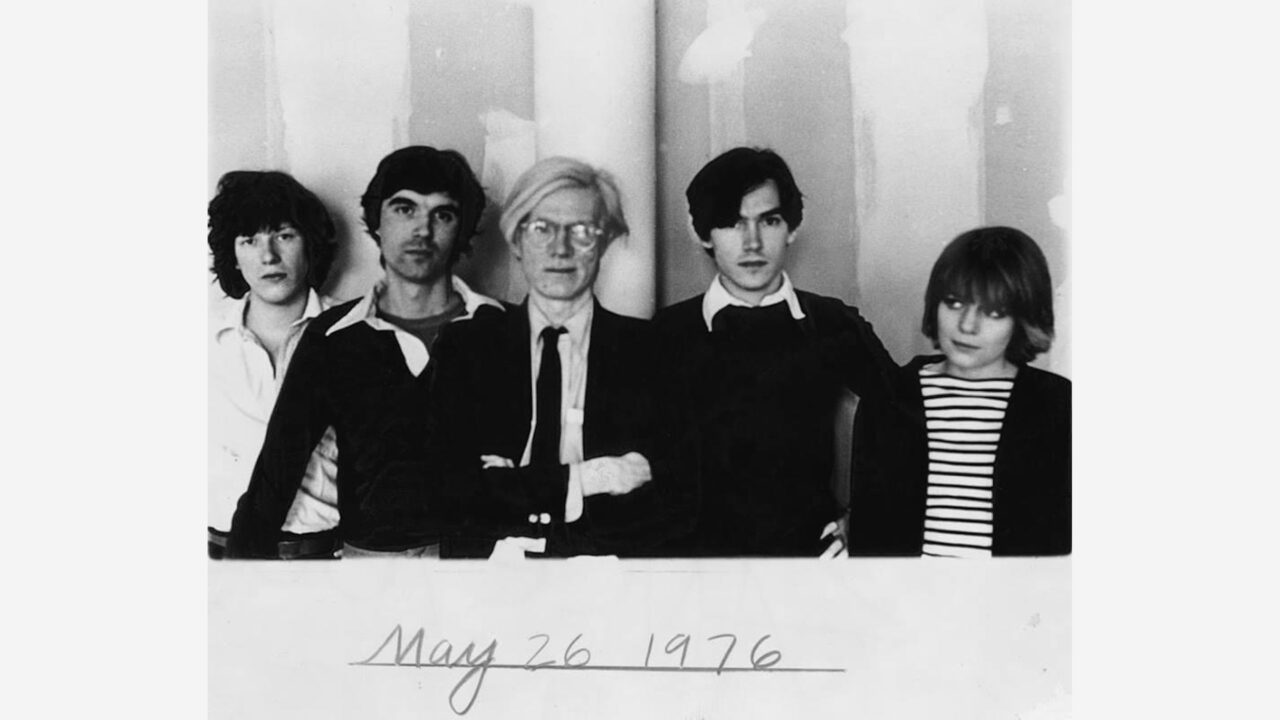 RB: Hello Chris. Duncan was always a huge fan of Talking Heads, Television, Blondie and a number of other bands that came up through the ranks at CBGB. What was it about that connection that turned it into a lasting friendship?

Chris Frantz: If you walked into CBGB’s in 1975 on a night when a good band was playing, chances are Duncan would be there. He was a real music lover and his taste in bands was very refined. He was friends with The Mumps and hung out with them. They were a fun group and attracted very pretty girls. Duncan loved the pretty girls and they loved him.

One night Duncan and Mumps frontman Lance Loud brought Andy Warhol to see our band Talking Heads play. Andy thought we were cute and invited us all to The Factory for lunch the next day, which was a dream come true for me.

When the Mudd Club became a thing, I would sometimes see Duncan there, but we weren’t bumping into one another the way we once had. We kind of lost touch.

We met Duncan again at the Rhode Island School of Design at a memorial celebration of the life of painter Richard Merkin and rekindled our friendship. I met Tina Weymouth for the first time in Richard’s painting class. Duncan and Richard had become friends in New York where they shared a love of figure painting and fine men’s clothing. They were dandies in classic men’s style. Duncan was no mere dandy, though. He was a fine person with keen intellect, excellent manners and a trustworthy character. He was a truly beautiful man. His memoir, 20th Century Boy, extracted from his diaries, is a fantastic account of a young painter in New York City in the 1970s. You should read it. 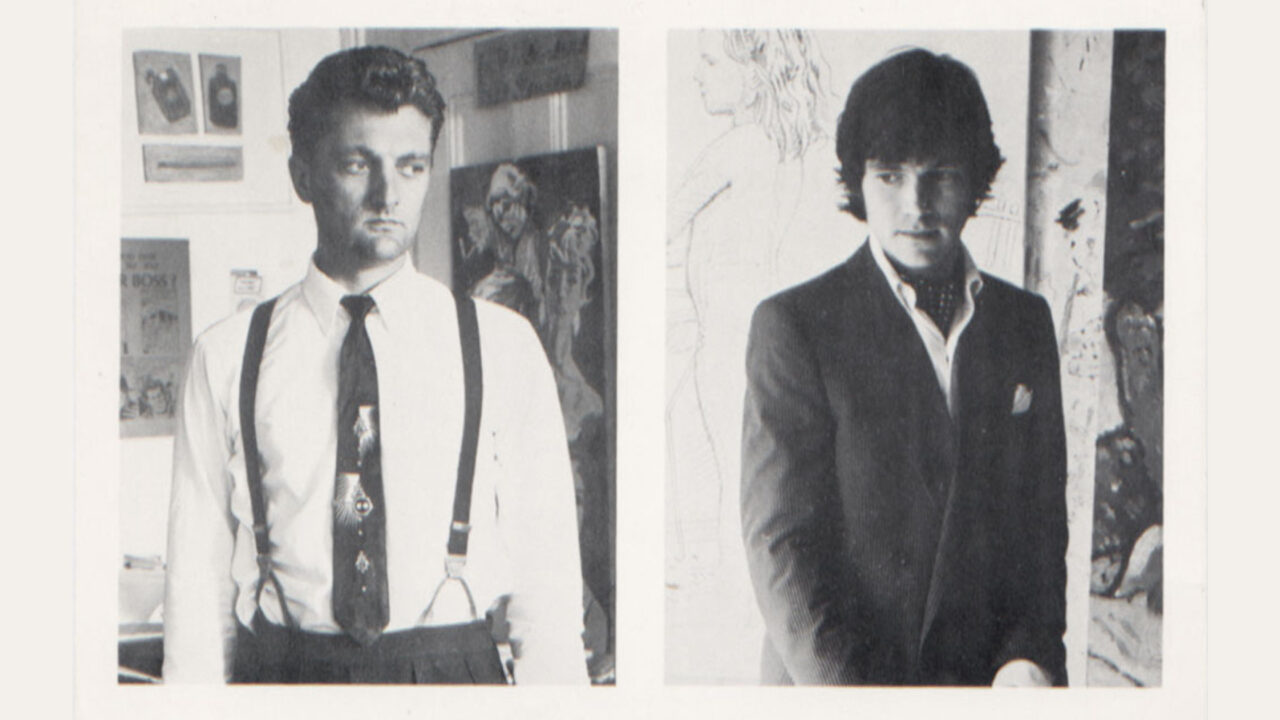 RB: Hi Walter. Duncan’s work presents a mood—a sense of longing, of romance or maybe a sense of Edward Hopper-like isolation—even his paintings of book jackets and cars can drift toward melancholy. Your paintings have a clear and vibrant Pop sensibility and an entirely different vibe. You’re both great draftsmen but surely there’s a bigger connection than painting and drawing. What is it?

Walter Robinson: How did Duncan Hannah relate to his own imagery? In 40 years of championing his stuff I never asked him. My first thought was to ring him and inquire, he was always so welcoming, always happy to talk about art. That being sadly impossible I instead called a couple of his friends to see what they thought, and they were most eloquent. But in the end it’s fairly simple: he liked the look, the emotional timbre, the sense of design. It was a taste for early 20th-century England for Duncan, spreading to continental film stars and markers of popular cosmopolitanism, as in Penguin paperbacks. Figurative artists must have a style, a manner, and Duncan’s was illustrative, straightforward, simple, a deliberate rejection of avant-garde theatrics proclaiming a spurious radicality. The man himself was dapper, personable, widely read; such was the correlation between his painting and person that he even married an American girl who was raised in England and has the accent. In my own paintings, which began as copies of American pulp illustrations from the ’40s and ’50s, I was seeking universals in cliches, largely concerned with desire, the passions and romantic drama. In contrast to my nonsense, Duncan preferred that English restraint, its muted colors and calm traditions, but in their depths, he found the same emotional truth that preoccupied me. And we were both preoccupied with women, of course. Love of women is always the first thing. 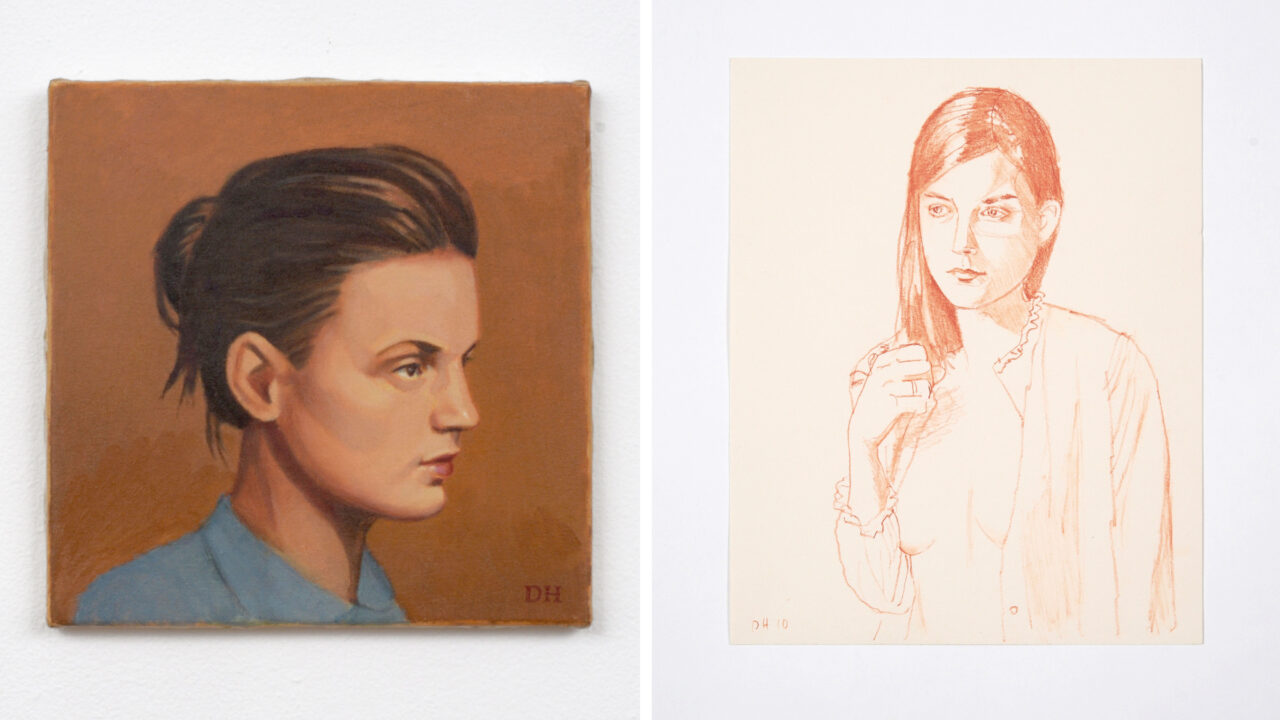 RB: Hello Richard. When I think about Duncan’s work and then look at your photographs, I can’t help being intrigued by the way you both express a fascination with women. There’s a similarity in much of the subject matter but the feeling and approach is so different. Your thoughts?

Richard Kern: Duncan loved a good mystery.  And what’s more mysterious than a woman?  We talked for hours about actresses and models we both loved, piecing together bits of info we’d read or heard in an attempt to understand the story of their lives while recognizing the futility and pointlessness of our investigations. Of course, we also talked about writers, directors, artists, and musicians but the discussion always came back to women. Duncan’s favorite subjects were enigmatic Italian, British and French actresses. He collected and posted photos of them and based stark paintings on them. His last post on Instagram was a perfect example of his type—Italian movie star Monica Vitti.

Looking at Duncan’s paintings of women immediately raised questions for me. Who is this, where is this, what’s going on? Information is present but only enough to enhance the inexplicable. Eventually, I realized that each painting is the peak of a backstory mountain compiled by Duncan to illustrate the same conclusion over and over—the subject is beyond reach and therefore an object of desire. Any interpersonal relationship is a mystery unfolding but trying to unwrap the mind of someone known only through their image is impossible. I think Duncan and I shared the unconscious need to depict through our work the yearning to know more about someone or something. This is the true definition of desire. The twelve-year-running conversation we had on this topic is something that I will really miss. Now his timeline has stopped, and he will become a mystery man. I think I’ll remember him as The Talented Mr. Hannah. 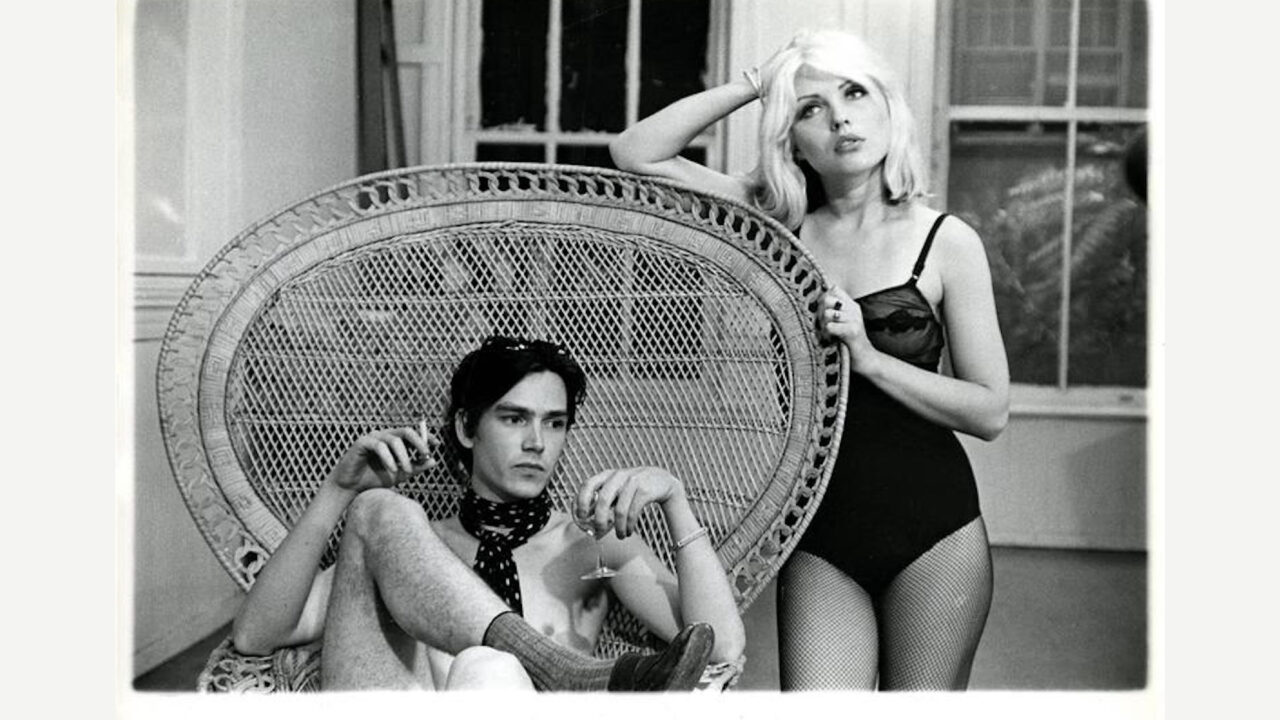 RB: Hi D. I always got a kick out of seeing you and Duncan in the 1976 film Unmade Beds. It still makes me smile when I have the opportunity to see it. Moving past those CBGB days and life on the Bowery, what do you remember most about Duncan?