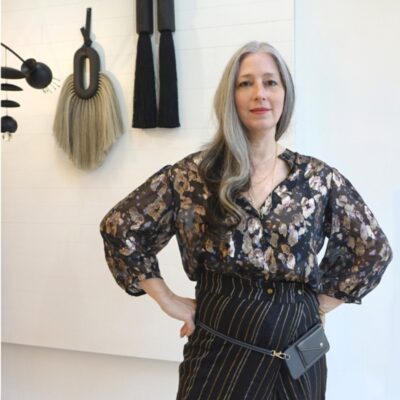 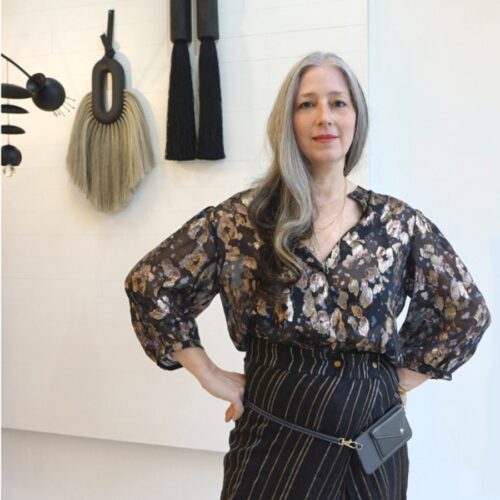 back to list
“I like to fix things and make things work better. I think this is the fundamental DNA of a designer.” Michele Varian got her start as a designer of products—first fashion and then home goods. In 2001, she opened her own store in SoHo, selling not only her designs but those of over 100 designers, and it was there she stayed until January 2020, when she moved to Brooklyn. Along the way, Michele got thinking about how she could shake up the industry status quo with the goal to improve upon the relationship between designers, brands and retailers and to create greater opportunities for independently run businesses. “I began writing about the issues facing retail, hosting roundtable discussions and co-founded Guesst.co,” she tells us. “I want to live in a diverse and interesting world, so I plant seeds. Some of them grow.” Here, Michele shares her favorite New York go-tos and a few anecdotes.

WHAT WOULD THE TITLE OF YOUR AUTOBIOGRAPHY BE?
Me or Three. One of the things I love about NYC is that it is a place to be whoever you want to be. Most of my friends think of me as a super independent person and are shocked to find out that I am one of triplets. Growing up in Detroit, my most used pronoun was “we.” For my life in NYC, it is a resounding “me.”

WHAT’S YOUR FAVORITE THING TO DO ON A SUNDAY AFTERNOON IN NYC?
During quarantine, it was to sit on our fire escape in the heart of SoHo on Broadway enjoying the remarkably blue sky and listening to the quiet, punctuated by the occasional sound of the subway purring below.

IF YOU COULD CHOOSE ONE PERSON TO SHOW YOU “THEIR NEW YORK CITY,” WHO WOULD IT BE AND WHY?
Thelma Golden. Besides always looking amazing while navigating the NYC art and fashion worlds, she is an educator, both socially and academically, challenging the way we see the world. I admire that.

WHAT OR WHO HAS INSPIRED YOU RECENTLY AND WHY?
John Lewis. He kept on fighting and has contributed to inspiring a new generation to hopefully make change that is long overdue. Allison Samuels, who has just launched The Level Up Project, an attempt to remove barriers of access to professions in craft and design. Lora Appleton, founder of FDC/Female Design Council; and Pete Davies, a tireless advocate for sustaining what is best of SoHo.

WHAT ARE YOUR FAVORITE NYC RESTAURANTS? WHAT DO YOU ORDER THERE?
Ed’s Lobster—the fish and chips. Ed makes his own pickles, which are used in the tartar sauce they serve with the fish and chips. It’s the smallest ingredient in the dish but makes all the difference.

WHAT’S YOUR GO-TO SPOT IN NYC FOR DRINKS?
It used to be my store stoop on Crosby Street. We had a much-beloved vintage bench outside and neighbors would be drawn there on warm nights to trade stories of the day. My first shop was on the edge of what had at one time been Little Italy, and there were still some old Italians in their 70s and 80s living upstairs who would join me along with other younger residents and neighborhood business owners. We used little muslin bags that I sold my jewelry in as “beer cozies” since we weren’t supposed to be drinking on the street. It was like having a front porch, but the Manhattan version. Now that I’ve moved my shop to Brooklyn, we’ll see what happens!

WHAT ARE SOME OF YOUR FAVORITE NYC BRUNCH SPOTS? WHAT DO YOU ORDER WHEN YOU GO?
I used to be a brunch aficionado. Growing up, my sisters and I used to wake up before my parents and make french toast or pancakes. Once in NYC, my friends and I would gather wherever we didn’t have to wait in line and could get a table for an ever-expanding crowd. I’m not sure you can still do that anywhere. During quarantine, most of those places have closed permanently. They haven’t re-opened yet, but my current pancake infatuation is for the muesli pancakes at Cafe Select on Lafayette. My husband has a weakness for their Croque Monsieur.

WHERE DO YOU GET YOUR ART FIX IN NYC? DO YOU HAVE A FAVORITE ARTIST?
The Picture Room is my new favorite little gallery. I love drawings and intimate viewings in small spaces where you make friends with everyone you talk to, including the artist.

WHAT ARE SOME OF YOUR FAVORITE LATE-NIGHT HANGOUTS IN NYC AND WHY?
My favorite late-night thing to do in NYC is to take a quiet stroll with my husband or a friend and see what we find. I often don’t even know the names of the places that we stumble upon. That’s the real beauty of NYC, there is always more that you haven’t yet discovered.

WHAT ARE SOME OF YOUR UNDER-THE-RADAR MUST-DO RECOMMENDATIONS FOR NYC VISITORS?
When I first moved to NYC, I took the subway every day over the Manhattan Bridge to get to work from Brooklyn. I remember being delighted when an art installation by Bill Brand appeared on the walls of the tunnel just before reaching the bridge on the Brooklyn side. It was like a flipbook of images that were animated as we passed by on the train. Now that I’ve moved my shop to Brooklyn, I am reverse commuting to Brooklyn from Manhattan and the art installation is still there! It tickles me every time I pass it and think of all of the life I have lived and have now come full-circle to the same subway stop I started at! The Big City is really just a Small World.

WHAT ARE SOME OF YOUR FAVORITE NYC STORES AND WHY?
As most small, independent shops have been priced out of the neighborhoods they made desirable, like SoHo, I am thrilled to have moved my shop to Brooklyn. While I was attracted to my new space for many reasons, what I only became aware of after signing the lease was that almost all of my neighboring businesses are independently owned and operated, like mine. An added bonus has been that we’re almost all female-owned. Consignment Brooklyn is amazing for previously owned designer clothes, that I couldn’t dream of being able to afford otherwise. The Primary Essentials has the most selective edit of designer home goods, while not overlapping with any of my shop’s assortment. My shop carries product from over 100 other mostly local home goods and jewelry designers, but I also sell my own collections of lighting, wallpapers, pillows and furniture. Humble House has remarkably accessibly-priced mid-century modern furniture. Mud, with its rainbow of hand-built ceramics is just next door to my shop. M. Patmos has engineered the best fitting face masks I have found, in addition to her own collection of easy to wear clothes. The list goes on, and we’re all on one block! Atlantic between Hoyt and Bond is where it’s at!

WHAT ALBUM OR SONG WOULD YOU CONSIDER YOUR PERSONAL SOUNDTRACK TO NYC?
Well, my husband is Brad Roberts, the lead singer and songwriter for the Crash Test Dummies. We quite literally belted out “New York, New York” from our fire escape a few evenings at 7pm while clapping for essential workers during the quarantine. My personal soundtrack is a tease for everyone else since I am privy to many of Brad’s demo tracks, which have never been released. One that he cheekily wrote for me is called, “You Can’t Have My Pussycat.”

WHEN YOU THINK OF NYC, ARE THERE ANY PARTICULAR EMOTIONS OR MEMORIES THAT IMMEDIATELY COME TO MIND?
I’ve always told my husband that he can sprinkle my ashes across downtown Manhattan, but he has argued that he thinks it would be illegal. Who would know? I would just be a little bit more soot and grime added to the city that I love.