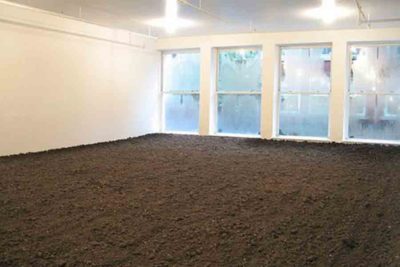 The New York Earth Room, 1977, is the third Earth Room sculpture executed by the artist Walter De Maria, the first being in Munich, Germany in 1968. The second was installed at the Hessisches Landesmuseum in Darmstadt, Germany in 1974. The first two works no longer exist. The New York Earth Room, which weighs 280,000 pounds, has been on long-term view to the public since 1980, and was commissioned and is maintained by the Walter Dia Art Foundation in SoHo.