<![endif]--> The Frick Collection | Art Museum on the Upper East Side 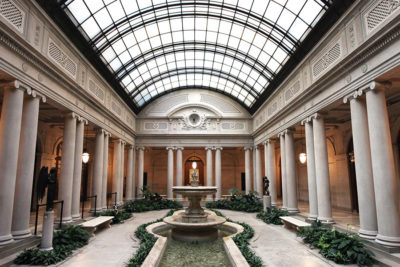 When Henry Clay Frick built his imperial mansion at 70th Street, he told friends he was doing it to “make (Andrew) Carnegie’s place look like a miner’s shack.” At his death, Mr. Frick bequeathed his New York residence and the most outstanding of his many artworks to establish a public gallery for the purpose of “encouraging and developing the study of the fine arts.” Chief among his bequests, which also included sculpture, drawings, prints, and decorative arts such as furniture, porcelains, enamels, rugs, and silver, were 131 paintings. Needless to say, the Frick Collection is one of New York City’s most beloved cultural treasures. Featuring works by Bellini, El Greco, Vermeer, Velazquez, Boucher, Goya, Turner, Van Dyck, Renoir, and Holbein, The Frick Collection is just as impressive as the ornate rooms in which they are showcased.

We recommend watching the short film on Henry Clay Frick and his collection (it plays every half hour in the music room), and use the free audio guide. Almost every piece is documented, and there’s no better setting in New York to brush up on your 17th century European History.