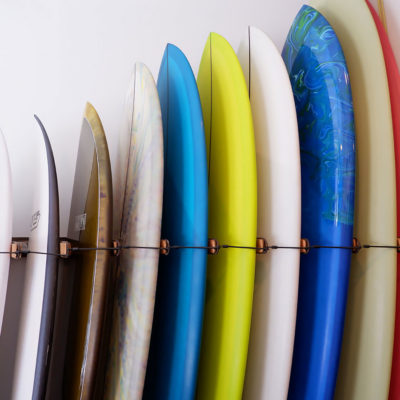 Surfer blood is shared by owners Morgan Collett, Josh Rosen, and Colin Tunstall, who have made a splash in SoHo with Saturdays NYC. Launched to suit a lifestyle occupied by surfing, their cosmopolitan oasis on 31 Crosby Street is part clothing store, part barista, all within a laid-back atmosphere derived from their SoCal inspirations. Beachwear, boards, and wetsuits sit among art, books, and their own private label, all to welcome the likes of those surfing, living, and working in New York City. We’re keen on their grooming projects, and head-over-heels for a bar of soap called ‘Atlantic’—it’s loosely based on Baxter of California’s Italian Lime glycerine bar, but was re-mixed by the Saturdays team to capture the essence of the Atlantic Ocean. For a tranquil escape in the warmer months take your espresso to the store’s backyard, relax in their serene wood-decked sanctuary, check out the wave reports on your iPad and lock down a weekend share in Montauk. Or a month in Santa Barbara.