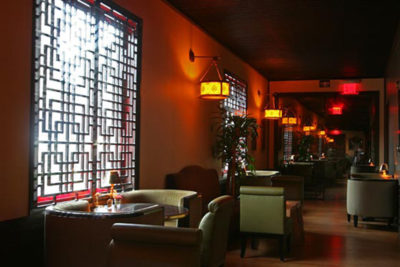 The Pegu Club on Houston Street is not the first bar by that name. In the early 1800s, British army captains set up a gentleman’s club in Rangoon called Pegu Club, and its renown stretched far over the continent, giving rise to the expatriate drinking community in Asia as well as the then-famous Pegu cocktail. That original saloon is now long gone, but its legacy lives on at Audrey Saunders’s venerated cocktail haunt, the place that helped launch a full-on mixology movement in Manhattan. Saunders honed her skills at no less of a drinking Vatican than the Bemelman’s Bar, in The Carlyle, and when she set out to start a place of her own, the inventive concoctions she came up with at Pegu Club started a frenzy.

There is so much attention to detail here, from the slow-melting giant ice cubes to the precise measurements that make every drink perfect. Although Saunders is a married woman and may not always be around to make the drinks personally, her spirit is still shaken and stirred into every order at Pegu Club. Go have a strange cocktail and pretend, for a moment, that you’re not on Houston Street—you’re in Rangoon.