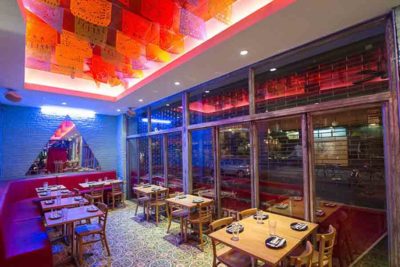 Mission Cantina has the feel of a neighborhood place, a casual spot to have a beer, a few tacos, and maybe something that will surprise you—after all, this is Danny Bowien’s Mexican-inspired sister to runaway Asian hit Mission Chinese. Some colorful Mexican paper cut-outs hang from the ceiling and there’s an odd blue tinge to the lighting, perhaps intended to foil Instagrammers. This being a Bowien effort, it’s hard to avoid the hype or the lines.

Standout Cantina offerings include an appetizer of soft-scrambled eggs with sea urchin, caviar, and spicy chili slices, and a beef heart and scallop ceviche that somehow really works. Bowien himself endorsed the whole chicken, prepared on a special rotisserie in the back, and by all accounts gunning for status as the best new poultry dish in the city.

Taco-wise, some of the offerings are traditional. There’s a genius carnitas taco made with three kinds of pork: confit shoulder; crispy, melt-in-your-mouth cubes of jowl; and fried chicharron. And some are the sort of unlikely, rock ’n’ roll combinations you’ll often find at Mission Chinese—chicken wing and octopus? Crispy beef tripe? Bowien and company are making the tortillas in-house, and, even more impressively, they’re preparing their own masa.

The succinct drinks menu—three cocktails made with soju (including the rather hilariously named Dirty Horchata), plus a house michelada, cheap beer, red or white sangria, and those colorful Mexican soft drinks everyone loves—won’t get you too trashed. Overall it is what you’d expect from a neighborhood joint, with a twist.