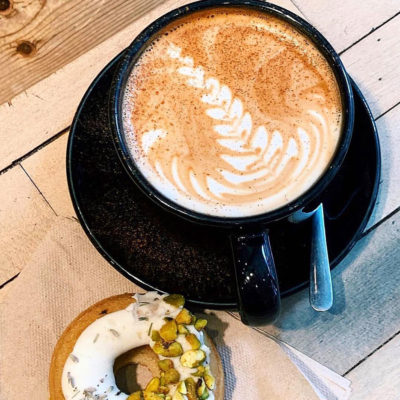 It’s hard to order a Happy Jack and feel blue. This signature drink served at Jack’s Stir Brew Coffee inside the Roxy, pairs well with anything from the fresh-baked pastry counter. Jack Mazzola started with an idea and ended up with a culture. First, he patented his own coffee-making technique (a stir brew method that gives a fuller flavor), then worked on a coffee farm in the Dominican Republic for a month, where he still sources his beans. By the time he opened up his first shop on 10th Street in the West Village (the first organic, fair trade, shade-grown coffee shop in Manhattan), a line spilled out the door. Many first-time customers became regulars, and not just for the solid coffee—there’s just something about Jack’s laid-back, old-soul vibe. Jack’s Stir Brew in Tribeca is Mazzola’s seventh location in New York, and serves classic, new favorites, plus vegan baked goods.