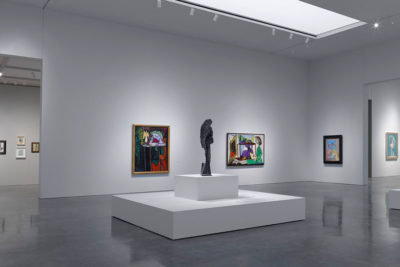 In the time since he opened a rickety poster shop in Los Angeles in the early 1970s, it can be argued that Larry Gagosian has done more to change the face of the contemporary art world than any other dealer. In 1999, he moved his SoHo gallery to industrial Chelsea, to no small wonder: Richard Gluckman designed the 25,000-square-foot monolith and the inaugural exhibit was Richard Serra’s monumental sculpture, “Switch,” a massive steel installation unveiled in November 1999. Today, along with art world luminaries such as Jeff Koons and Richard Prince, Gagosian’s A-list roster of artists also includes Damien Hirst, who holds the title of highest paid living artist of all time. If it’s any indication of Gagosian’s larger-than-life status these days, his 2000 Damien Hirst exhibit is legendary as one of the most extravagantly produced shows in New York history, with a three-story-high anatomical model and an ob-gyn examination chair sunken in a fish tank.

Please note there are two locations in Chelsea – the second gallery is located at 522 West 21st Street, between 10th and 11th Avenues. For a full list of Gagosian locations in NYC and worldwide, visit their website.