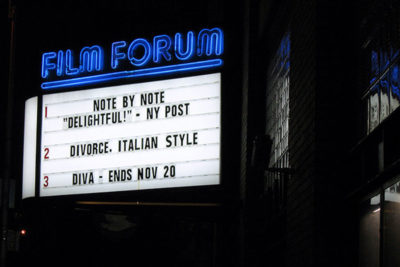 Film Forum opened in 1970 as an alternative screening space with 50 folding chairs, one projector, and a $19,000 annual budget. Fast-forward to today, and the theater is the only autonomous nonprofit cinema in New York City and one of the very few left. Film Forum’s current Houston Street cinema (now with 489 seats) remains a hot button for cinema junkies and features an array of hard-to-find movies and genres including foreign and American classics, documentaries, directors’ retrospectives, and festivals. Expect to find everything from Hitchcock to Truffaut, African documentaries, Mick Jagger trying to act in a hot tub, and even pristine restorations.