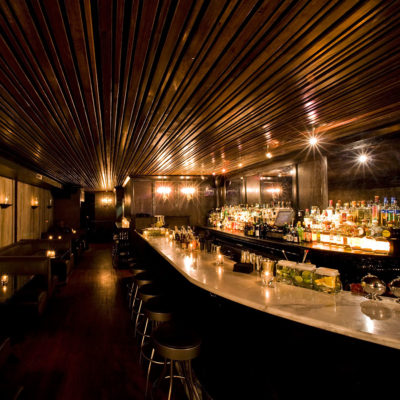 In 1919, the Volstead Act brought a swift end to American nightlife. Named for the Prohibition-era belief that to drink is to live a life shadowed by death, Death and Company exudes an ambiance that calls to mind speakeasy days of yore when cocktails were considered an art form. Hidden behind an inconspicuous wooden door, the dimly-lit lounge pays homage—re-invents even—pre-prohibition cocktail. Carefully crafted by some of the city’s top mixologists, we tip our fedoras to such lore-filled liquids as the Dick and Jane, Last Train to Oaxaca, Racketeer’s Julep and Black Magic. And we all know that merriment follows both drinking and eating, so order up a few small plates like the pulled pork sliders, seared lamb chops, and crispy pork belly. You’ll soon be singing the praises of 1933, the year Volstead was repealed.