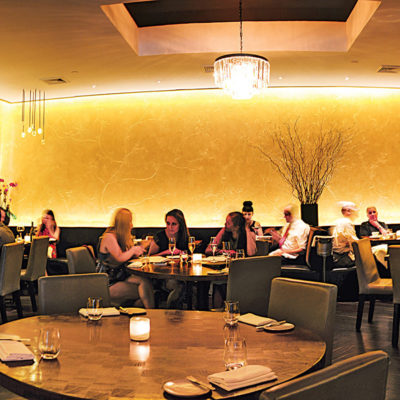 Tribeca had a high-profile renaissance in the 1990s as the residential neighborhood of choice for wealthy young families of a certain artistic sentiment; and two men played figurehead for the movement: actor Robert DeNiro and restaurateur Drew Nieporent. The two teamed up for Tribeca Grill as well as Nobu and its various spin-offs, but Nieporent had already established himself on his own with Montrachet, which opened in this 239 Broadway space in 1985 and held a three-star rating for over 20 years before it reopened as Cortone. When Cortone, which retained New York Times’s three stars and added two additional Michelin stars, closed in 2013, everyone wondered what would become of the venue. The answer is Batard, Nieporent’s nod to downtown fine-dining of yore that feels as fresh as it does familiar. The décor is clean and modern without being cold, and diners will be treated to chef Marcus Glocker’s inventive Nouveau French/American cuisine as a choice of two, three, or four course prix-fixe.