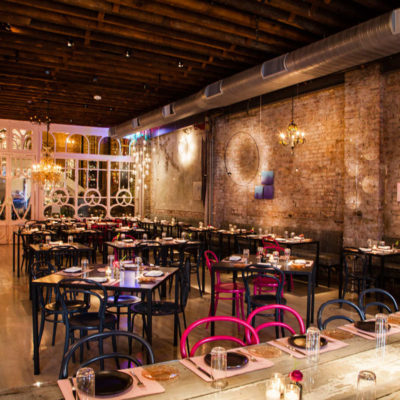 Jean-Georges Vongerichten has gained immense praise in the New York restaurant scene for ABC Kitchen, and due to the raging success of the brand, he opened ABC Cocina in April 2013. Does the magic of Kitchen transfer over to the Spanish/Latin-influenced little sister next door? In spades, and then some.

From the moment you walk through the door, a lovely team of hosts greet and then seat you at the bar. The ambiance and general vibe of the place is spectacular. Once at the bar, you are met with an interesting and eclectic cocktail list, but the sangria offerings will blow you away (as they should at a tapas-focused destination). Jamon iberico de bellota is prepared perfectly and is the finest of its kind (the meat comes from free-range pigs that roam oak forests along the border between Spain and Portugal, and the acorn-only diet during its last period produces a most desirable flavor). Patatas brava are served with rosemary aioli and a spicy-tangy sauce that tastes most like a deviation of classic BBQ, which makes for a delicious and interesting combination.

The place is becoming renowned for its tacos, and while all are on the level of incredible, the fish tacos up the ante to outstanding. All taco offerings come in sets of two, so don’t under-order as you will regret it later. Alas, there’s no time for regrets here, as ABC Cocina keeps delivering on all other sections of its menu. Beef tenderloin ‘burnt ends’ from the wood-burning grill come in a chimichurri sauce that enhances every crispy bite. For dessert, the ‘impossible’ flan is—you guessed it—impossible to miss out on. Between the food, ambiance, and service, ABC Cocina is truly a remarkable dining experience that we’d be happy to go back to again and again until we’ve tried everything before the locally-focused seasonal menu changes. And then we’ll come back again for more.