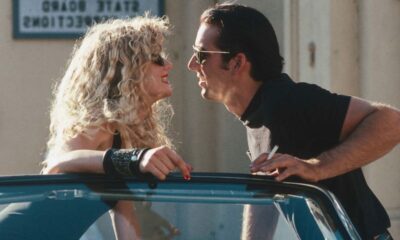 Wild At Heart on 35MM

back to list
With the success of Blue Velvet and the Twin Peaks pilot bolstering his career, David Lynch’s 1990 Wild At Heart finds the director at his most fearless, a mood that suits the film’s young, love-crazed couple. Adapted from a novel by Barry Gifford and starring a Nicolas Cage (before he slipped into self-parody but still delightfully nutzo) and a never sexier Laura Dern, Wild At Heart is Lynch’s love-letter to The Wizard of Oz, Elvis Presley, road movies, and the power of reckless love. Supporting the lustful couple is a stellar cast featuring Harry Dean Stanton, Willem Dafoe (at his all-time creepy best), Crispin Glover, Isabella Rosellini (herself romantically linked to Lynch at the time), and Laura Dern’s real-life mother Diane Ladd in a wonderfully histrionic villain role. Despite some explosive violence and truly unsettling moments, it’s the most traditionally “fun” of Lynch’s catalog, one that doesn’t sacrifice an ounce of his trademark surrealism or pitch-black sensibility.