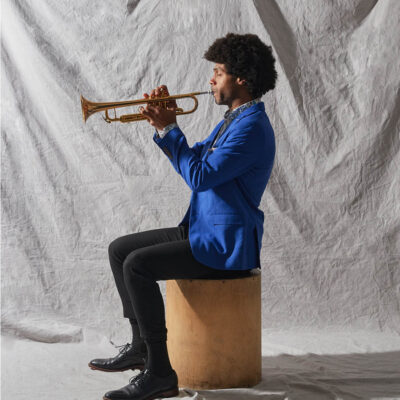 Where Roxy Bar at Roxy Hotel New York No. 2 Ave. Of The Americas TriBeCa, New York City 10013 Map It

back to list
Wayne Tucker is a Trumpeter, Composer, Arranger, Violinist and Vocalist based in New York City. He has performed, toured and recorded with many of today's current Jazz stars including Kurt Elling, Al Foster, Dee Dee Bridgewater and Cyrille Aimée, Pop stars like Taylor Swift, David Crosby, Elvis Costello, Matt Simons and Eric Hutchinson, R&B singers Ne-Yo and Gabriel Garzon-Montano, Hip Hop artists such as Jidenna and Ryan Leslie, and with Rock bands like Brass Against. He has performed at some of the worlds greatest venues including Madison Square Garden, The Hollywood Bowl, Avery Fisher Hall, The O2 Arena, The Apollo , The Ravinia Festival and The Kennedy Center. He has played for TV shows like The Tonight Show, America’s Got Talent, Jimmy Kimmel, Ellen Degeneres, The Today Show and Good Morning America, and appeared in commercials for companies like Mastercard, Dove, and Get Your Guide. Additionally he wrote the soundtrack and co-stars in the short film Hotel Bleu. Wayne has released 4 albums under his name, and has performed at clubs and festivals in 5 continents. He can be seen performing around the world with many of today's current and up and coming stars.