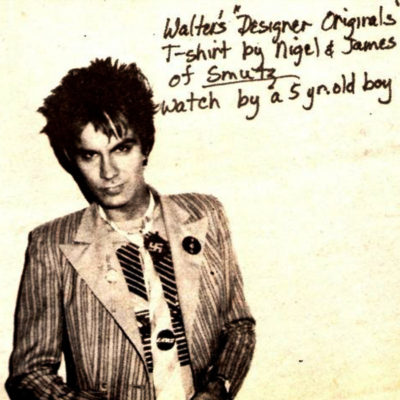 back to list
Recently signed to Cleopatra Records, Walter Lure & The Waldos have just released their new album 'Wacka Lacka Boom Bop A Loom Bam Boo'. This is the first new album in 24 years from legendary guitarist-vocalist Walter Lure, an original member of The Heartbreakers, who spearheaded the first wave of punk rock.

"This is my first release of new songs in 25 years or so since the last Waldo's album. That might seem like a long time but it really only feels like a few years-life seems to contract over long periods for some reason," says Walter Lure.

Ahead of this album release, the band released the lead track 'Crazy Kids' which will also be featured on the forthcoming full-length film 'Thunders: Room 37', which dramatizes the final days of Lure's former bandmate Johnny Thunders.

Walter Lure tells the story: "Crazy Kids was originally written back in the 90's sometime after the first Waldo's release but, for some god knows what reason, I forgot about it after awhile. I hadn't performed it in over 20 years until I dug it out again for this new release. The opening chords have a hint of a Sex Pistols feel to it and that was definitely on purpose. I remember discussing the high A major chord with Steve Jones of the Pistols on the Anarchy tour. It has lots of open strings reverberating with the higher notes."

Their new full-length also features other new tunes such as 'Damn Your Soul', as well as killer new versions of Heartbreakers classics 'London Boys' and 'Take A Chance On Me'.

In 1975, Walter Lure became an original member of The Heartbreakers as guitarist and vocalist, joining Johnny Thunders, Jerry Nolan (of the New York Dolls), and Richard Hell (of Television), who was later replaced by Billy Rath. Lure was playing with glam-punk band The Demonswhen he joined The Heartbreakers and earlier played with anarchic Bronx hard rock group Bloodbath in the late '60s and early '70s.

The Heartbreakers supported the Sex Pistols on their ill-fated 1976 Anarchy Tour just as the UK punk scene was building momentum. In 1977, they released their first and only studio album 'L.A.M.F.' The band's 1977 song 'London Boys' is a swipe at the Sex Pistols, in response to the Pistols' song 'New York', a put-down of the New York Dolls.

After The Heartbreakers' "official" breakup in 1977, the band would often reform, continuing to play the occasional gig right up until Johnny Thunders' death in 1991.

Lure also worked with The Ramones on their albums 'Subterranean Jungle' (1983), 'Too Tough To Die' (1984) and 'Animal Boy' (1986), released a single with The Blessed, and also started a number of bands, including The Hurricanes and The Heroes, before ultimately founding The Waldos. In 1997, Walter Lure also played a set of shows for the 40th anniversary of The Heartbreakers 'L.A.M.F.' album, joined by Blondie's Clem Burke, Sex Pistols' bassist Glen Matlock and Social Distortion's Mike Ness.