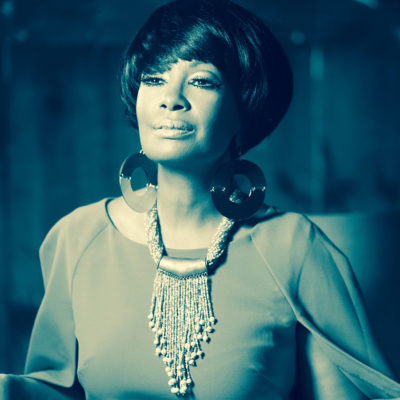 back to list
Share
You have to feel something about what you're saying if you want anyone else to buy into it, explains Vivian Sessoms with absolute certainty. It's important to me to mean what I say when I'm writing or singing a song. It can't simply be just a collection of words. For Vivian, a life surrounded by music has ingrained the passion and the power of music in her. Born and raised in Harlem, Vivian, whose mother was a session/jingle-singer, and father who was a flautist/percussionist (for James Brown among others), learned the wonder and the craft of music at a young age.

In a neighborhood filled with nightclubs, churches and impromptu gatherings-turned-jam-sessions at the family homestead, she was already singing by the time she could talk. "Growing up in Harlem, there always seemed to be music playing in our house or at a neighbors house. I was so immersed in it, that I guess I viewed music as a kind of backdrop to my life", she recalls. By the time she was nine, Vivian had begun doing television and radio voice overs. With the help of casting agent Mikki Powell (The Wiz), she made the rounds of auditions for various Broadway shows, all while receiving classical training in voice and piano. Somewhere around the age of 14, Vivian began composing her own music, following in the footsteps of her musician parents.

A few years later, while on one of her first major tours, performing with pianist/composer Ryuichi Sakamoto (whose film credits include Merry Christmas Mr. Lawrence, Little Buddha, High Heels), Vivian had her eyes and ears opened to an entirely new world of sound and became galvanized. Sakamoto taught Vivian much about song-craft, performance and musicianship. She absorbed as much as she could from the brilliance of his artistry. In Sakamoto's band, she found herself surrounded by accomplished, seasoned musicians such as drummer Manu Katche (Peter Gabriel, Sting), Victor Bailey (Weather Report, Madonna) and Darryl Jones (Miles Davis, Rolling Stones). Sakamoto expected her to behave on par with those musicians, placing her in the spotlight as a featured vocalist, and teaching her to sing in Japanese. She in turn pushed herself tirelessly towards perfection as both a singer and performer.

Several years of resume building followed, with Vivian performing, either live or in the studio, with an amazing array of artists including: P. Diddy, Michael Jackson, Donna Summer, Sinead O Connor, and Stevie Wonder to name a small few. She did a stint with Virgin Music Publishing and then signed on as an artist and staff writer with K.G. of Naughty By Nature for his Divine Mill imprint, though an album was never released. She even went on to write and perform as a guest artist on a number of Sakamotos' later releases, but unlike with Sakamoto, none of these situations would influence her the way future partner Chris Parks would.

Chris and Vivian met during a recording session he was producing, where Vivian was again hired as a guest vocalist. Though things were touch and go in the beginning, the pair began recommending one another to other artists in their respective circles. This, in turn, created repeated scenarios for Vivian and Chris to work together often, eventually discovering that in addition to their mutual respect for one another's talents, they made a formidable team. Where as Sakamotos' influence on Vivian had been more of a mentorship, Chris was that of an equal, the two forging a partnership in the truest sense of the word. Combining their talents to write songs for other artists, the pair stumbled upon this chemistry almost by accident, "It was like being hammered over the head" explains Vivian when recalling their pairing, "I realized I had found a kind of kindred spirit in Chris." That was the beginning of their joint production company Red Music, that has since gonewritten, produced or remixed songs for a number of well known artists.

At a music exec's suggestion, while re-recording songs they had originally written for another artist, Chris, Vivian and a few of the players on the demo's began reshaping tunes and writing new material. They instantly realized they had stumbled onto something exciting, thus forming the group Albright (so named for Vivian's maternal grandmother). The end result was Sunny One Day, an album recorded over the course of three years at their Suprdupr Sound Studio in Brooklyn. Striving to make the album an entity unto itself, a complete body of work, and not just a collection of songs, the pair took their time fine-tuning until they were satisfied. A unique mixture of soul, jazz, & rock, coupled with distinctive melodies and lush instrumentation, the duo succeeded where many artists today fall short, in creating music that has instant familiarity and warmth. If there's any truth to Vivian's credo that you have to truly believe in what you're saying before anyone else can, and be willing to stand behind it with passion, then she's already won the battle with "Sunny One Day".

Following the debut project, after a lengthy hiatus is the highly anticipated follow up, LIFE. An altogether different project in tone and feel, LIFE in many ways, seems to pick up where Sunny One Day left off, in that it too explores themes of love and loss, while touching on a few of today’s more pressing political issues. It moves deftly between genres without skipping a beat, but with this new collection Sessoms tackles the age old dilemma in jazz, that of finding fresh ways to present the standard. She does so, by mining the pop genre, turning unexpected radio favorites into more mature explorations, thereby expanding the genre. With LIFE, we are treated to arrangements of newer compositions one would not ordinarily expect to hear on a jazz record, including a few penned by the artist herself. But it's what she does with songs we know and love, where she and partner Parks' arranging and production skills really shine. Keeping arrangements simple but beautifully so, with performances ranging from subtly nuanced to gospel shouts by Vivian, and boasting guest appearances by some of the most sought after musicians on the scene today, makes for an album well worth the wait!