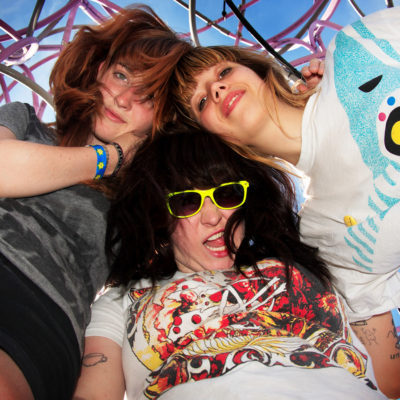 back to list
Deriving their name from the ill-fated characters featured in the work of writer/illustrator Henry Darger, the Vivian Girls (not to be confused with the "craft pop" duo of the same name) are a Brooklyn-based trio whose gritty, lo-fi tunes nod to seminal indie pop acts like Black Tambourine, Talulah Gosh, and Tiger Trap. Comprised of guitarist/vocalist Cassie Ramone, bassist Kickball Katy (Goodman), and drummer Ali Koehler, the Vivian Girls sprang into the indie circuit in 2008 with a handful of 7" singles released on a passel of small labels, including "Wild Eyes" (Plays with Dolls Records), "Orphanage" (Woodsist Records), and "I Can't Stay" (In the Red Records). Their self-titled debut full-length was released on Mauled by Tigers and In the Red in September that same year. The record became something of a sensation and the trio spent the year touring and gaining fans the world over. Their quickly recorded follow-up album, Everything Goes Wrong, was released in late summer of 2009. After switching out drummers in the summer of 2010 (Ali joined Best Coast and was replaced by Coasting's drummer Fiona Campbell) and taking a break for other projects (Ramone formed Babies with Woods' bass player Kevin Morby, Goodman formed La Sera with Brady Hall), the group hit the studio in late 2010 to record their third album. Share the Joy was released in April of 2011 on their new label Polyvinyl.