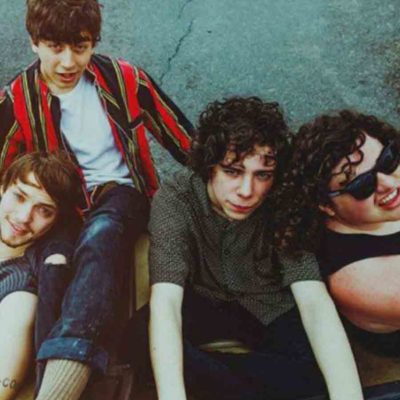 back to list
The embers of '60s garage rock and the flaming-hot fire of the 2010s garage punk sound burned bright in the earliest releases of Chicago's Twin Peaks, including their second album and proper studio debut, 2014's Wild Onion. Meanwhile selling out rock clubs and earning a reputation as a good-time live band, they issued the more reflective Down in Heaven in 2016, which concentrated on later British Invasion influences. Still loose and thriving in a live setting, by 2019's Lookout Low, the group was exploring the territory of '70s roots rock and jam bands.

SunkenTwin Peaks was formed by four young Chicago natives -- vocalist/guitarist Cadien Lake James, guitarist Clay Frankel, bassist Jack Dolan, and drummer Connor Brodner -- in the early 2010s. The guys had known each other and been friends since elementary school, but only formed a band after the duo James had with his brother Hal split up so Hal could join the Smith Westerns. They began playing together near the end of high school, then went on tour during their senior year. Before heading out on the road, they had quickly and cheaply recorded an album in James' basement to sell in order to keep them in gas and beer. Titled Sunken, the album caught the ear of Autumn Tone, which issued it in the summer of 2013. After graduating, James, Dolan, and Brodner headed to Olympia to attend Evergreen College, but they decided school wasn't for them, so they swung by L.A. to get Frankel and headed back to Chicago.

Urbs in HortoOnce there, they began working on a second album with producers Andrew Humphrey and Colin Croom. Taking more time to craft their sound but never losing the wild and loose feel of their live set, the album showed that the bandmembers' decision to quit school and stick together was wise. Wild Onion was issued by Grand Jury in summer 2014, just a few weeks after Twin Peaks wowed the crowd at the Pitchfork Festival with their set. More festivals, including Lollapalooza, followed amid a relentless touring schedule with multiple trips across the U.S. and forays into Canada, Mexico, the U.K., and Western Europe before their third LP, Down in Heaven, arrived in spring 2016. With Croom joining the lineup on keyboards, the album retained Twin Peaks' rough edges while drawing inspiration from the reflective tone of favorite works from the late '60s (the Rolling Stones, the Kinks, the Beatles). The following year, they delivered the double-live album Urbs in Horto, recorded over three nights at Chicago's Metro and Thalia Hall in 2016. Over the next year, the band toured and released a series of 7" singles that were then compiled on 2018's Sweet '17 Singles. Also in 2018, Frankel released an eponymous album as Grapetooth with his then-roommate Chris Bailoni (Home-Sick) that combined garage punk and new wave influences.