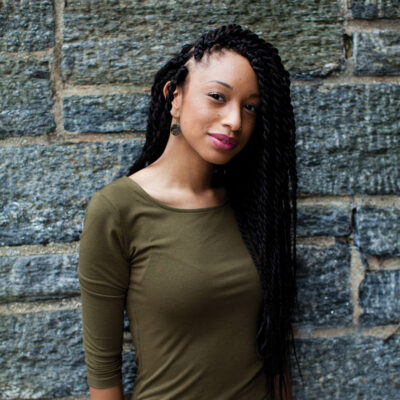 Originally from Dallas, TX and now living in New York City, Tahira Clayton is known for her honest vocal delivery and charismatic stage presence. A strong lyricist and storyteller, Tahira’s musical style honors the ancestral lineage of Black American Music. Tahira was named “Audience choice,” and “Most Promising Artist” at the 2018 UNISA International Jazz Voice Competition in Pretoria, South Africa. In 2017 she won the DC Jazz Prix competition with AMP Trio, earning a headlining performance at the 2018 DC Jazz Festival and partnership with Willard Jenkins and the DC Jazz Festival. She has led groups and performed in places such as Dizzy’s Coca Cola Club (Jazz at Lincoln Center), Sony Music Hall, Tribeca Performing Arts Center, The 55 Bar, Minton’s Playhouse, The Rainbow Room, Cornelia Street Café, the Cell Theatre, and the Jazz Showcase (Chicago). As well as being an in-demand bandleader and performer, Tahira is a sought after side-woman, lending her voice to numerous recording projects, performances, and songwriting collaborations. Tahira is a well established creative teaching artist. Tahira currently serves as the vice president and is a founding board member of the Women in Jazz Organization (WIJO), based in NYC. In addition to her work with WIJO, Tahira has traveled internationally to present lectures on her research entitled, “The Dangers of Jazz: Sexism in Society.” A 2015 graduate of the University of North Texas Tahira has performed and participated in master classes of many of the genre’s greats. Tahira’s debut album of all original compositions, “Wait, Till Now” is currently available for purchase and streaming. www.tahiraclayton.com