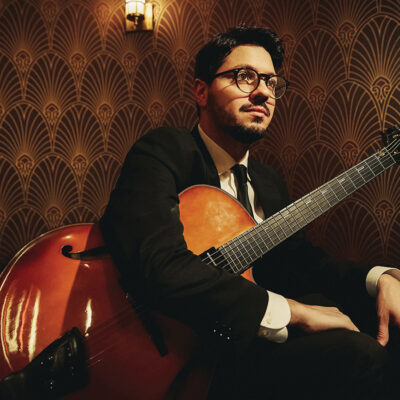 It was the kind of endorsement most rising guitarists can only dream of, and then some. In his interview for Vintage Guitar magazine’s February 2016 cover story, Pat Metheny was asked to name some younger musicians who’d impressed him. “The best guitar player I’ve heard in maybe my entire life is floating around now, Pasquale Grasso,” said the jazz-guitar icon and NEA Jazz Master. “This guy is doing something so amazingly musical and so difficult. “Mostly what I hear now are guitar players who sound a little bit like me mixed with a little bit of [John Scofield] and a little bit of [Bill Frisell],” he continued. “What’s interesting about Pasquale is that he doesn’t sound anything like that at all. In a way, it is a little bit of a throwback, because his model—which is an incredible model to have—is Bud Powell. He has somehow captured the essence of that language from piano onto guitar in a way that almost nobody has ever addressed. He’s the most significant new guy I’ve heard in many, many years.”