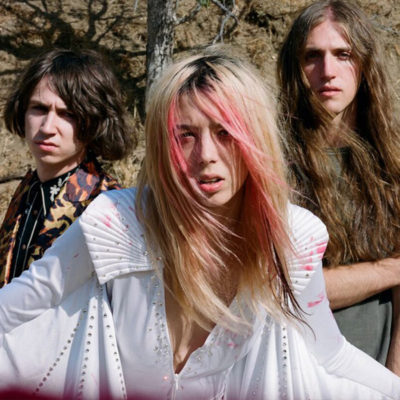 back to list
Born on the streets of Los Angeles, Starcrawler are a band of misfit rock & rollers for a new generation. A Starcrawler show is both a classic arena rock show and a truly 21st century transgressive piece of art. Led by Lead singer Arrow de Wilde’s cathartic and often violent performances: diving into the audience covered in blood at the end of the night, stealing phones and clothes from the audience, writhing and crab walking across the stage before climbing the rafters; the band brings an unforgettable chaotic electricity to every concert. Musically, the rhythm section of Austin Smith (drums) and Tim Franco (bass) carry a heavy presence, and 18 year old wunderkind Henri Cash (guitar) plays the perfect foil to Arrow de Wilde with an undeniable style and performance of his own, tearing at the guitar with a massive sound like few have before him and attempting to one up de Wilde’s performance every night, throwing his instruments and diving into the crowd.

Their album "Devour You" is out October 11, 2019 on Rough Trade Records. Produced by Nick Launay and recorded at Sunset Sound.