<![endif]--> Shannon and the Clams live at Bellhouse | Tune In | GrandLife 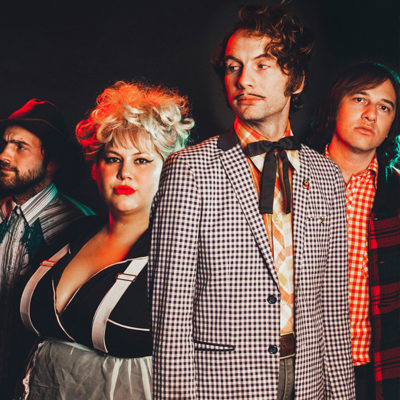 Shannon and the Clams live at Bellhouse

back to list
Mixing together the doo wop and early rock & roll of the '50s, the dramatic girl group sounds of the '60s, and some punky snarl imported from 1977, Oakland, California's Shannon & the Clams came up with a sound that was charmingly retro but never stale. Emerging on the Northern California underground/D.I.Y. scene in 2009, the band, led by vocalist Shannon Shaw, earned a reputation as a stellar live act, and came into their own as recording artists when they signed to the Sub Pop-distributed Hardly Art label for 2013's Dreams in the Rat House and 2015's Gone by the Dawn. The group edged closer to mainstream visibility with 2018's Dan Auerbach-produced LP Onion.

I Wanna Go HomeFormed in the late 2000s by vocalist/bassist Shannon Shaw, vocalist/guitarist Cody Blanchard, and drummer Ian Amberson while going to art school, Shannon & the Clams began playing shows around town and soon released a single on Weird Hug Records. They next hooked up with 1-2-3-4 Go! Records for their debut album, 2009's I Wanna Go Home. Around this time, Shaw was playing bass and singing in Hunx & His Punx too. After a 2010 full-length, Sleep Talk, for 1-2-3-4 Go! and a long string of singles, they moved over to Hardly Art for their third album. Dreams in the Rat House was recorded over the course of a year in various locales -- including Nobunny's practice space and a log cabin -- and featured a tighter, tougher all-around sound.

Shannon & the Clams' reputation as a live act spread, and they toured extensively in North America and Australia. By the time of 2015's Gone by the Dawn LP, Amberson had left the group and Nate Mahan (aka Mayhem) had taken over the drumming duties. Produced by Sonny Smith at Tiny Telephone Recording in San Francisco, the album was another step forward in sound and craft for the trio. In 2016, Shannon Shaw learned that Dan Auerbach of the Black Keys was a fan of the band and had recommended the Clams to an Australian promoter who made their Antipodean tour possible. When Shaw contacted Auerbach to thank him, the two struck up a friendship, and Auerbach signed the band to his Easy Eye Sound label. Auerbach also produced Shannon & the Clams' first album for the label, 2018's Onion.