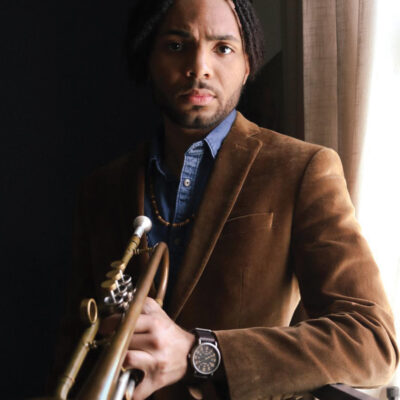 Anthony Hervey is a jazz trumpeter, composer, and teacher from South Florida. At the age of 18 he was admitted to the Juilliard School, graduating with his B.M. in 2019 and his M.M. in 2020. Hailed as a “beautiful trumpet player of the first magnitude” by Wynton Marsalis, Hervey has performed at Jazz festivals and concert halls around the world with some of the best that Jazz has to offer, including Wynton Marsalis, Sean Jones, Nicholas Payton, Christian McBride, and Chick Corea. In 2019, he made his international debut as a bandleader at the Bern Jazz Festival in Switzerland. In February of 2020, he opened for the Branford Marsalis Quartet at Rose Theater with a co-led Jazz quartet, Citizens of the Blues. He is also on Christian McBride’s recent Big Band Album, “For Jimmy, Wes, and Oliver”, which was released on Mack Avenue Records. On another note, Hervey is prominently featured acting and playing trumpet in the horror anthology series, Monsterland, airing on Hulu. Hervey is an artist with firm musical roots who strives to understand the past while also giving meaning to Jazz in our present time. He views music as a force that can uplift and inspire. In the same way Jazz has changed his life and brought him joy, he strives to spread that joy and change the lives of others.