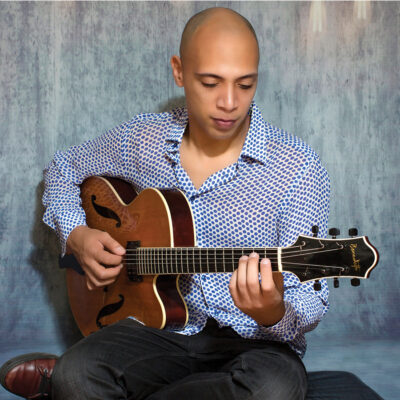 Leandro Pellegrino is an internationally acclaimed guitarist who has been steadily developing his reputation as one of the finest guitarists of his generation. Born in São Paulo, Brazil, Leandro studied music composition and Jazz improvisations during his teenage years. After earning his Bachelor's degree, Leandro auditioned for the prestigious Berklee College of Music and was awarded a full-ride scholarship to pursue his studies in Jazz and improvised music. In the Fall of 2011, Leandro moved to the U.S to live his dream of being immersed in the country’s fertile musical environment. Since then he has gained an impressive reputation among his peers and had the chance to work with many of the greatest Jazz musicians on the scene. He has already performed with Dave Liebman, Danilo Perez, Christian McBride, John Pattittuci, Bob Cranshaw, Terri Lyne Carrington, Eric Harland, Donny McCaslin, Gerald Clayton, among others. He is also part of the Grammy-award winning album “Beautiful Life” by the exceptional jazz singer Dianne Reeves. Back in 2013, Leandro entered the Montreux Jazz Guitar Competition and was awarded the 1st prize by the hands of the legendary Lee Ritenour. He was also the first South American guitarist to ever win this Competition. In the following year, Leandro performed at the Montreux Jazz Festival as the opening act for Lee Ritenour. Since then Leandro has been performing and teaching all over the world.