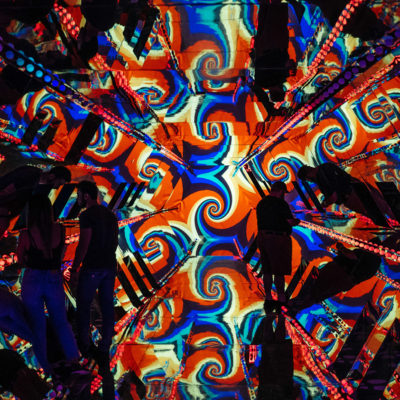 Fairs and festivals have served as outlets for hedonism throughout history, allowing revelers to experience decadent pleasures and, quite often, vice. Following the Industrial Revolution, fairs and festivals began to be carried out at larger scales in the form of traveling carnivals and expositions. Millions of visitors would make pilgrimages to the World’s Fair, where exhibitions on the midway ranged from famed designer Norman Bel Geddes’ topless “Crystal Lassies” to a primitive version of a sex robot. In 1939, Salvador Dali designed the “Dream of Venus” pavilion to promote Surrealist art, featuring bare-breasted performers who posed in bizarre tableaus and dove into large water tanks in an aquatic fantasy of subconscious reveries.

Super Funland occupies four galleries and features thirteen original commissions created by internationally celebrated artists and designers including Bompas and Parr, Droog, Bart Hess, Rebecca Purcell, RuPaul, Snøhetta, and more. Inspired by the educational, artistic, and purely salacious aspects of historic midway attractions like Salvador Dali’s Dream of Venus, these interactive installations reimagine the illicit thrills of the lost world of traveling carnivals and fairs for a new generation of pleasure-seekers, blurring the lines between exhibition and attraction for an unforgettable experience. Highlights include a 4-D immersive ‘Tunnel of Love’ ride, a biometric kissing booth that measures passion between partners to award prizes, an erotic fortune-telling machine with an appearance by RuPaul, and an elaborate climbing structure leading to a two-story slide that empties into the Museum’s carnival bar. These attractions and curiosities have been created in partnership with One:Night hotel app, Sonos, We Vibe, Lelo, Kangaroo, Bella, Cowgirl, and Felix & Ambrosia CBD