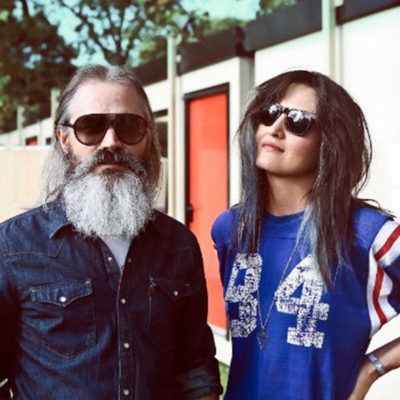 back to list
Moon Duo is a band hailing from San Francisco, California, United States who formed in 2009. Made up of Wooden Shijps guitarist Ripley Johnson and singer Sanae Yamada, the band have released three E.P’s and two studio albums since their debut effort the year that they formed.

One would reasonably assume that, being the driving force behind the west coast space-rock maestros Wooden Shijps, Ripley Johnson would have an outlet for all the heavy riffing weirdness he could possibly handle. Turns out that this is not the case, and in 2009, he and his partner formed a band in order to make music and tour without the load that a whole four piece rock band carries with them. See as a matter of fact, Johnson had more ideas for songs and concepts that Wooden Shijps could reasonably use and so by the end of 2009, Moon Duo had already released their debut E.P in the form of “Killing Time”, and followed that up with their first standalone single “Love On The Sea”.

These releases, though they were put out on tiny, independent labels in their native San Francisco, generated much more of a name for the band that either of its members were expecting. After a follow up E.P with 2010’s “Escape”, the band were offered a permanent record with Brooklyn, New York’s Sacred Bones Records which they accepted. The band were now labelmates with David Lynch, John Carpenter and Zola Jesus, and their debut album “Mazes”, was as acclaimed as anything else released on the label.

The band were now well on their way to becoming cult sensations and with their follow up album “Circles”, they well and truly earned that title. They’re truly unique, and for that, they come highly recommended.