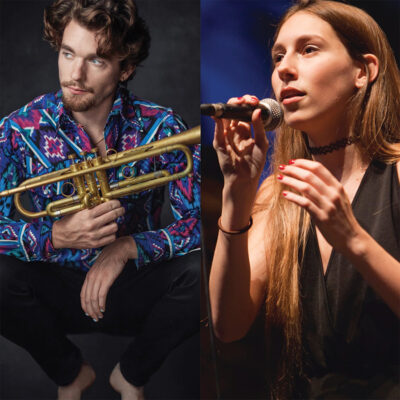 Tony Glausi is widely celebrated as one of the most accomplished trumpet players on the planet, with more awards and accolades than we have time to get into here. For years now, Glausi has been hailed as such while being overlooked for his prowess as a composer and producer. With EVERYTHING AT ONCE, his new album out September 3rd, Tony heads for straight-to-the-gut pop jams and R&B-influenced tunes that take inspiration from a bevy of sources while still remaining uniquely true to Glausi’s vision as an artist.
Born in Barcelona in 1998, vocalist, pianist and composer Mar Vilaseca is currently a Jazz Performance student at The Juilliard School. She has developed her music career very quickly due to the support of her father who is also a jazz musician. Mar has performed at various international music festivals including Guangzhou Jazz Festival (China), Festival de Jazz de Barcelona (Spain), and Festival de Jazz de Bogotá (Colombia). She has collaborated with numerous artists in the jazz scene of New York, including Jonathan Barber, Taber Gable, Julius Rodriguez, Benny Benack, and The Steven Feifke Big Band among others. In 2020 she released her first album entitled ‘Find The Way’, which presents all original compositions influenced by jazz, gospel, and soul music.