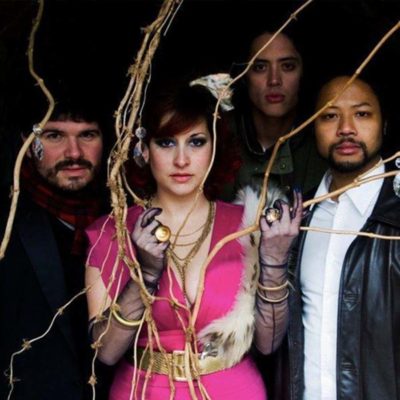 back to list
It’s Midnight in Copenhagen. Sweater-clad Danes are packed tightly into a pedestrian underpass in the heart of the city, anxiously awaiting a show that is truly out of the ordinary (and likely illicit). Bass, drums, trumpet, keys, and voice echo off of the concrete walls, filling the whole chamber with the disco beat. A confetti cannon explodes, and hundreds of sweaty bodies shake their hips in unison to the sound. This is the spell of Midnight Magic, New York City’s larger than life disco boogie ensemble that has captivated audiences from Copenhagen to Colombia.

While today a Brooklyn staple, Midnight Magic actually traces it’s roots to Los Angeles. Morgan Wiley and W. Andrew Raposo first bonded over a shared love of Rawkus Records in a USC dormroom, eventually forming the hip-hop meets no-wave band ‘Gaijin.’ Gigs throughout LA eventually led the two to cross paths with Hollywood native Tiffany Roth, then lead singer of performance art group ‘The Come-On’s.’ Soon after Morgan and Tiffany began recording songs together, building a base for what would become Midnight Magic.

Andrew and Morgan were the first to make the move eastward, being recruited to join major label outfit Automato in New York City. By 2007, Andrew and Morgan were dividing time between their newly opened Midnight Sun Studios and playing and recording with many DFA acts including LCD Soundsystem, The Juan Maclean, Still Going, Shit Robot, and Hercules And Love Affair. They also started Jessica 6 with fellow Hercules alum Nomi Ruiz before focusing their full attention on Midnight Magic.

Tiffany’s arrival in the Big Apple sparked the formation of Fidelio with Andrew, Morgan, Max Goldman, and Carter Yasutake. The addition of Jason Disu, Nick Roseboro, Caito Sanchez and Andrew Frawley made for a bigger sound, and thus deserved a bigger name. The band adopted “Midnight Magic” in 2008, and released their debut single “Beam Me Up” in 2010. Hypnotic drums, punchy piano riffs, and an epic vocal performance by Tiff collided to create label Permanent Vacation’s “most ecstatic moment”, according to Resident Advisor. Even today, the disco anthem is one Spin Magazine confirms “still hasn’t worn out its welcome on dance floors.”

The group’s anticipated follow up “Drop Me A Line,” also released on German label Permanent Vacation, solidified Midnight Magic’s status in underground nightlife. The “banger,” simply put according to Magnetic Magazine, let to the group’s first tour, in support of Cut Copy, and later Holy Ghost!. These two tracks laid the foundation for their debut album Walking the Midnight Streets, self-released in 2012. The full length, according to KCRW, takes listeners on “a wild ride” through over two years of the band’s material.

A forthcoming EP Vicious Love was released on October 13/14 by dance label Soul Clap Records. The new material’s darker edge puts the ‘midnight’ in Midnight Magic, exploring the darker realms of the group’s disco sensibilities. Coupled with remixes from Soul Clap, No Regular Play, and Dimitri from Paris, the release exhibits a musical versatility that spans from the DJ booth to the live stage.