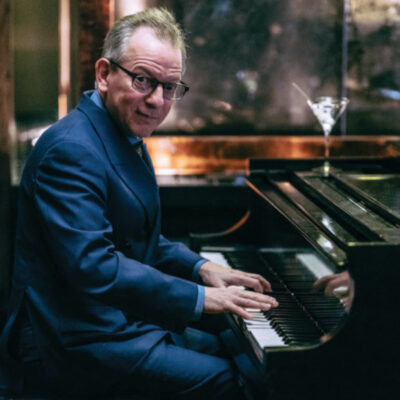 Where Roxy Bar at The Roxy Hotel 2 Avenue of the Americas New York, NY 10013 Map It

back to list
Grab a cocktail and join us for live tunes brought to you by our resident pianist, Michael Garin!

Michael Garin is The Roxy Hotel's resident pianist. The Drama Desk Award winner, whose résumé includes Elaine’s, The Monkey Bar, The Rainbow Room, and The VIP Room at Limelight, has created a beguiling musical experience at the Roxy, blurring the distinction between pianist and D.J. In a departure from tradition, Michael has brought together a wild and eclectic musical mélange which has attracted a new generation of piano aficionados. Blending such diverse musical worlds as Shaggy, Om Kalthum, Rossini, Jobim, Zappa, and Raymond Scott, Michael holds forth with a goofy, stylish, and very smart stream of musical consciousness that brings young and old together for a post-work-and-school experience. From encouraging small children to play piano along with him, to his gently bizarre and self-deprecating additions (tap dancing while sitting on the piano bench; announcing that he’ll be “in his office” accepting requests), Roxy Bar has become a friendly, welcoming, yet sophisticated musical destination. AND there’s no cover or minimum.

Michael Garin has been a mainstay in New York City nightlife for decades and has never failed to entertain and create a fresh new style tailored to venue and circumstance. From hosting the midnight burlesque shows in the mid-90s that launched the burlesque revival (and landed him in L’Uomo Vogue in an Ellen von Unwerth photo spread), to co-creating and co-starring in Song of Singapore, the groundbreaking environmental musical (for which he received the aforementioned Drama Desk Award), to acting stints with Spike Lee. And now there is a cult following on Facebook for Michael’s Ogden Nash-style daily promotional poems for his gigs at the Roxy and elsewhere.

As a pianist, songwriter, singer, poet, actor, and song-and-dance man, Michael Garin has carved a singular niche for himself as a performing artist who has crisscrossed boundaries and managed to bring joy to a diverse and appreciative audience. As Michael often says, “It’s a blessing to be in the Happy Business.” Check out Michael's new album release "Hey Look! It's Michael and Mardie" here!
#MeetMeAtTheRoxy