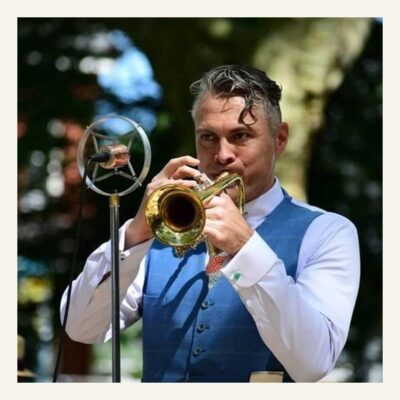 While making a living busking in the subway upon his arrival to NYC in 1998, Michael Arenella made a name as he immersed himself in the virginal Jazz of the 1920s. He learned to play the cornet and to croon. This immersion went on to give birth to a cultural phenomenon, a good decade before it became wildly popular in popular culture: the rebirth of the Roaring ‘20s. Almost as soon as the tens of thousands began pouring through the gates of his now famous Jazz Age Lawn Party on Governors Island, a restlessness started to beckon Arenella toward his next pursuit. The pandemic of 2020 galvanized this. A year without a place to be, a sense of purpose indefinitely suspended, gave him the opportunity to reunite after 15 years with his first and natural voice: the trombone. With this, the desire to travel further down the line musically; to evolve through challenge - became an urgent need. Though Arenella is now focused on expression untethered to one era, his sense swing and soul very much remain his timeless obsession.