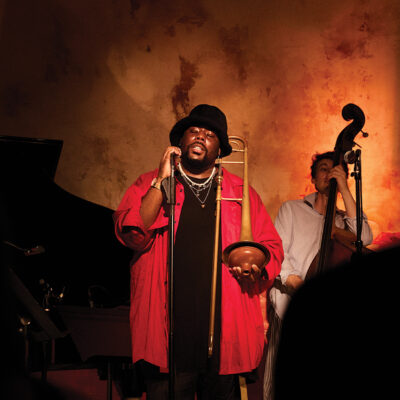 Born and raised in New Orleans by his maternal grandparents, trombonist and singer Jeffery Miller understands that you don’t get to where you want to be without sacrifice. When jazz vanguard Wynton Marsalis hand picked him out of high school to join him at Juilliard, Jeffery knew that he would have to leave his aging grandparents behind to chase his dream in New York. Now 25, Miller has scored 3 GRAMMY® nominations in 2019 for contributions to projects by Jon Batiste and John Legend. Graduating from Juilliard with both his bachelor’s and master’s degrees (in 2018 and 2020 respectively), he’s set on a path to make his mark as a solo artist merging two musical souls. One remains deeply rooted in the melodic jazz trombone that rings closer to home, and the other in his voice echoing the sound of contemporary R&B artists like Ty Dolla $ign and Frank Ocean. Both are intertwined by a tale of two cities and the people in them who make Jeffery Miller who he is today.