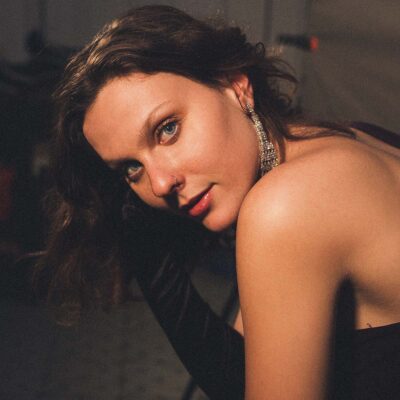 Born and raised in Kansas City, Missouri, she got her start performing with her father, master of stride piano, Bram Wijnands. Now a recent graduate and former Ella Fitzgerald scholar at the Conservatory of Music at SUNY Purchase, emerging jazz vocalist Lucy Wijnands has been named the 1st place winner of the 4th annual Ella Fitzgerald Vocal Competition. Wijnands has received the 2020 President's Award for Achievement for the SUNY Purchase Conservatory of Music as well as a Downbeat Student Music Award as Outstanding Jazz Vocal Soloist. In the fall of 2020, Wijnands performed in Tokyo, Japan, serving as an ambassador for Purchase College as their Ella Fitzgerald Scholar and recipient of the President’s Award of Achievement. Wijnands has completed a five month residency with the Birdland Big Band and has performed with musicians as acclaimed as Jon Faddis, Joe Lovano and Kenny Washington. In 2016, marking the beginning of her professional jazz studies, she appeared in concert at Jazz at Lincoln Center’s Appel Room. Wijnands is now working on her debut album, “You’ll Never Walk Alone” with an interdisciplinary approach to jazz music.