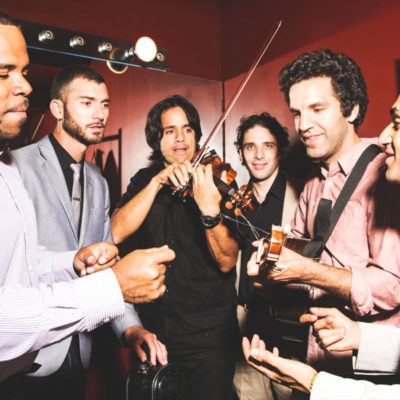 Los Hacheros live at The Django

back to list
Brooklyn’s Los Hacheros, modern-day torchbearers of the Golden Age of Latin music, recorded their sophomore album Bambulaye live to vintage analog tape, giving the music a raw, but warm and open sound similar to the Latin legends that have inspired them. Their debut album Pilon was a well-received introduction to the band and received critical praise from tastemakers including Wax Poetics, Vibe Magazine, and The Washington City Paper, amongst others. Wax Poetics states, “The groove to this music is deep,” while The City Paper boasts,“…its solid arrangements and lively original songs have impressed old-school salseros and young music fans alike.” Los Hacheros revives folkloric styles like son montuno, guaracha and salsa, and often combine them with Bomba, a fiery rhythm from the mountains of Puerto Rico. “Los Hacheros has the magic of group improvisation,” adds bassist William Ash. “We play in a style that is swing oriented and emphasizes the Cuban clave-like great ones of old: Arsenio, Reve, Ritmo…”. A band of only 5 musicians, Los Hacheros can sound like a conjunto of 12. Eddie Venegas (Marc Anthony, Orquestra Broadway), who plays violin and sings chorus, improvises mambos on the trombone, Itai Kriss. (Edmar Castaneda, Grupo Latin Vibe) sings, plays flute, campana, and guiro, while Papote Jimenez is in charge of lead vocals, soulful soneos (improvised verses) and congas. William Ash (Alfredo de la Fe, Brenda K Starr) holds down the tumbaos on baby bass while Jacob Plasse plays the tres, a guitar-like instrument originating from the Oriente Province in Cuba. “There are a million tiny cues on Bambulaye that let you know it is a live band,” describes Plasse. “It feels like it could both fall apart and explode at any moment.”