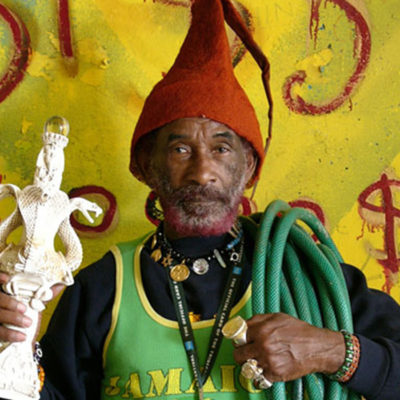 back to list
Mr. Rainford Hugh "Scratch" "Pipecock Jaxxson" "The Upsetter" Perry, is on many missions at once. Just one of them is "to criticize all tax collectors and...to execute all thief, all liars and vampires, mentally..."

Jamaica’s most famous producer, recording artist, performance artist and shaman/trance channeler’s vast and important life has had a more than a passing impact on not only Reggae but numerous other trends in popular music, from rap and hip-hop to electronica. Like Sun Ra, Stockhausen and Hendrix, Lee does not use ordinary means to achieve his goals..."I’m the best magician in the Universe. I’m the best Miracle Man, and I’m the best scientist. I am three-in-one and all in heart. I be anything I want to be. I’m a dreadlocks, I’m a baldhead, I’m everything. All at the same time. Check it out."

Born circa 1936 in the parish of Westmoreland, West Jamaica, Scratch grew up with music, coming to Kingston in the early sixties, another "country boy" come to town to look for work. Before long he found himself working for Clement ‘Coxsone’ Dodd and his Downbeat sound system as gofer and runner.

When Coxsone opened the doors of his recording studio, Studio One, in 1964, Perry moved up to A&R man, running auditions and taking masters to the pressing plant. A few years later, Perry was a recording artist on the Studio One label, cutting his own tunes, often humorous and sometimes downright raunchy. It was at this time that Scratch became acquainted with the Wailers, who were already big stars on Studio One.

After Ska gave way top Rock Steady in 1966, Lee ceased working exclusively for Coxsone. In early 1967, he became Amalgamated Radio and TV owner/repairman Joel "Joe Gibbs" Gibson’s right hand when Gibbs decided to get into the recording business. Perry coordinated talent, supervised sessions, and essentially launched Gibbs’ fledgling "Amalgamated" label. Shortly thereafter, Scratch delivered a salvo straight to Coxsone’s head and a possible caveat for then-present employer Gibbs: "I am the Upsetter/You will never run away with me..." His nom-de-feisty, The Upsetter, had now firmly been established in the minds of the listening (and non-listening) public. [Perry was probably inspired to christen himself thusly through Little Richard’s house band, the Upsetters.

Around this time he also became attached to West Indies Recording Limited, where he continued to record, challenging (for example) Prince Buster’s "Judge Dread" and his 400 year sentences for rude boys with his own "Set Them Free," where Scratch takes on the role of defense attorney for the accused hooligans: He asks Judge Dread (Buster) to "give them a chance to mend their mistake...as your Honour knows, a hungry mob is an angry one." Ironically, Scratch played one of the accused rudies on "Judge Dread."

At West Indies Recording, Lee’s innate talent developed and would soon set off explosions in the Kingston recording scene. He became an in-house producer at WIRL, and, with a little help from engineer Lynford "Andy Capp" Anderson, his knack for experimenting, his predilection towards the bizarre and his sheer audacity became explosively (and entertainingly) apparent.

In 1968, Scratch had a falling out with Gibbs and in the process of committing his feelings to wax ended up detonating another musical bomb: "People Funny Boy." This record, which started off with a baby crying, was this time straight to Gibbs’ head and musically way ahead of its time. Its new punchy, jerky beat was one a handful of records coming from WIRL to make the transition from Rock Steady to Reggae. "People Funny Boy," emerging on Scratch’s own Upsetter Records, would eventually sell 50,000 copies and put enough cash in Scratch’s pocket to jump-start his epic career from soul man to sorcerer.