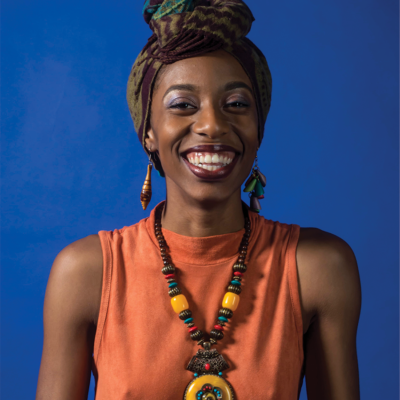 Imani Rousselle is a Texas-born vocalist and composer currently living and operating out of NYC. Though she has studied in Classical, Jazz, and R&B styles of singing, Rousselle performs and composes in those styles in addition to rock, blues, folk, country, fusion, and more. Rousselle believes music to be a distillation of a spirit, and so choses never to limit the sound in which the expression breaks free. She has released this spirit through writing and singing with bandmate Jackson Shepard under Human Bloom, and also solo compositions. Rousselle earned a Bachelor of Music from Columbia College Chicago, also receiving a minor in management, an additional minor in environmental studies, and is currently working on a Master of Music from the Manhattan School of Music. While in Chicago, Imani performed on many stages around the city including the legendary Jazz Showcase and The Green Mill, and since moving to New York just a few months before the global shutdown, she was able to sing on stages such as the world famous Dizzy's Jazz Club, Clements Place, the Schomburg Center in Harlem, and more. She has performed alongside great musicians including Stefon Harris, Casey Benjamin, Marc Carey, Jaleel Shaw, Cory Henry, and is looking forward to the living of life with renewed fervor for togetherness and creation.