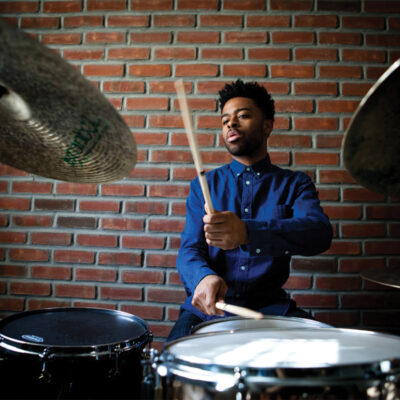 In addition to his first-call status as a sideman, Barber has recently stepped forth as a composer and leader with his Vision Ahead band, featuring saxophonist Godwin Louis, guitarist Andrew Renfroe, bassist Matt Dwonszyk, and pianist Taber Gable. Even with Barber’s history of high-profile gigs and recordings taken into consideration, DownBeat magazine calls Vision Ahead’s self-titled debut album his “greatest accomplishment to date.” Released on Rockwood Music Hall’s largest stage in May 2018, Vision Ahead is a powerful declaration of intent for a band that’s been making waves on the modern jazz scene since its debut performance at Smalls Jazz Club. The group’s blend of classic, swinging jazz with elements of gospel, rock, soul, and fusion is a compelling showcase of Barber’s broad stylistic range as a composer and performer. Jonathan Barber & Vision Ahead was featured and headline the 2018 Rainy Days Jazz Festival held in St. Petersburg and Moscow, Russia.

Born in Hartford, CT, Barber has been playing drums since the age of five, initially falling in love with the instrument through watching his father perform in the family church. Barber’s upbringing in the church instilled within him a deep appreciation of the power, passion, and full sound of the gospel music tradition, and he now brings its infectious energy to the wide range of styles in his musical toolkit. Early influences also includes beginning George Duke, Fred Hammond, Weather Report, Yellowjackets and Commissioned, and classic jazz titans like Miles Davis, Jackie Mclean, Art Blakey, John Coltrane, Charlie Parker, Tony Williams and Thelonious Monk. With soul, impeccable groove, and explosive chops, Barber has synthesized his favorite traditions into a thoroughly modern and endlessly adaptable musical expression that connects with listeners from across generations.