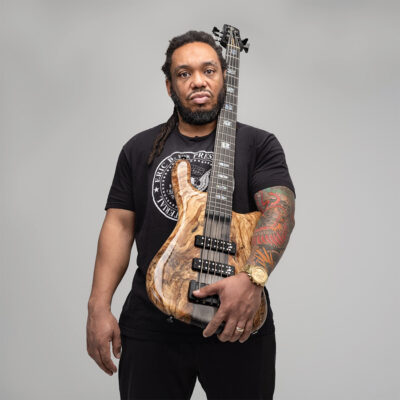 Mark Kelley has been the full-time bass chair with the Roots since 2011, a gig he landed after being asked to sub for Christian McBride in Questlove’s band Mo’ Meta Blues.

Born in Houston, Texas, to a classical pianist father and an R&B–loving physician mother, Kelley played cello and guitar before settling on bass at age 13 after seeing his uncle play in church. At Houston’s High School for the Performing and Visual Arts, he added upright to his repertoire, inspired by McBride and Roland Guerin.

A scholarship to Berklee College of Music followed, where fellow students Chris Laughlin and Reuben Rogers further affected his playing. Upon graduation, he spent two years touring with John Scofield’s Überjam before moving to New York City in 2005. Meeting Meshell Ndegeocello through his doorman, who literally flagged her down as she walked by, Kelley began six years of road work with the maverick miss.

After subbing in Mo’ Meta Blues in 2011, Kelley landed a gig backing Michael McDonald and Sara Bareilles at the fourth annual Roots picnic. A month and a half later, he was offered the full-time role with the Roots.