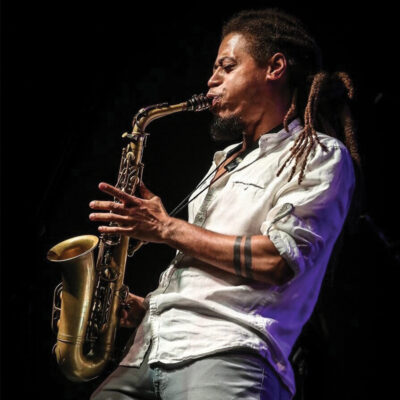 Irwin got his start at the age of 9 when he won a lottery in his New Jersey public school and was gifted an alto saxophone. He attended Princeton University on a full ride to study East Asian philosophy, learning Japanese and eventually moving to Tokyo. He unexpectedly ran into songstress Melody Gardot backstage at the Tokyo Jazz Festival who heard him play and immediately hired him to on back-to-back international tours with her band. Soon after he caught the ear of 3x Grammy/Tony Award winning NEA Jazz Master Dee Dee Bridgewater and joined her working band, honing his skills under the master vocalist on saxophone, flute, and bass clarinet. His woodwind work is featured on Theo Croker’s Grammy-nominated album Star People Nation, and he has toured with Grammy-nominated vocalist Jazzmeia Horn and bass virtuoso Charnett Moffett, among many others. Irwin now leads two bands of his own, the Irwin Hall Organ Trio & Toronto Sounds, and continues to perform in cities around the world including London, Tokyo, Shanghai, Rio, Prague, New York, Paris, Melbourne, and more.