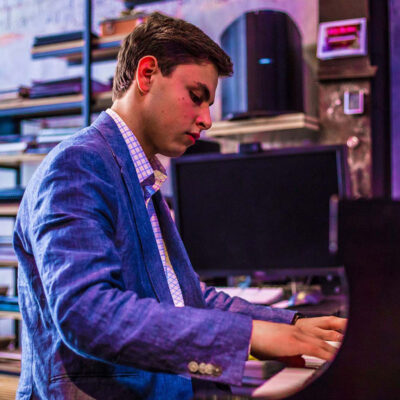 Pianist and composer Joe Block is a dynamic rising talent in the jazz world. Originally from Philadelphia, Joe has had the opportunity to work and play with many esteemed musicians including Wynton Marsalis, Kurt Rosenwinkel., Leslie Odom Jr., Peter Bernstein, Ari Hoenig, Eric Alexander, Jaleel Shaw, Hannibal Lokumbe, and The Captain Black Big Band. As a bandleader and sideman in New York and Philadelphia he has performed at numerous venues including Dizzy’s, The Django, Birdland, Smalls Jazz Club, Smoke Jazz Club, Alice Tully Hall, Chris’ Jazz Café, South Jazz Parlor, @exuberance, Kimmel Center, Philadelphia Clef Club, Hilbert Circle Theatre (Indianapolis) and the Black Cat (San Francisco). He has also performed at the Monterey, Belize, Montclair, Mid-Atlantic, Next Generation, and Telluride Jazz Festivals. Hailed by Jazz at Lincoln Center as one of "jazz's most promising young composers", he has been commissioned to write or arrange music for the Jazz at Lincoln Center Orchestra with Wynton Marsalis, the Philadelphia Ambassador Big Band, the Juilliard Jazz Orchestra, the Wynton Marsalis Septet, and the Jazz Orchestra of Philadelphia, for which he arranged part of Gustav Holst’s “The Planets”. Joe currently lives in NYC where he attends both the Juilliard School and Columbia University. He appears on the 2020 Grammy-nominated record "The Intangible Between" by Orrin Evans and the Captain Black Big Band.