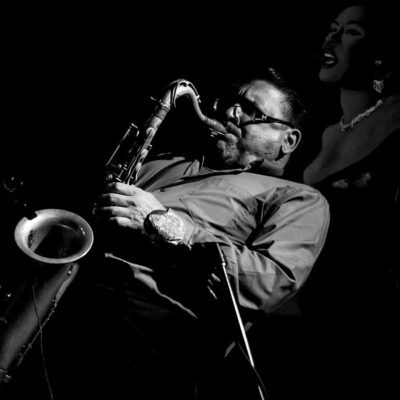 back to list
Internationally renowned veteran sax man Jerry Weldon, has been a player on the jazz scene for more than 35 years. With eight CD’s as a leader and more sideman sides than even he can count…or remember, this native New Yorker’s performance/recording résumé reflects his venerable tenor tenure and reads like a virtual "Who's Who of Jazz."

In 1990, Jerry became a charter member and featured soloist with Harry Connick Jr.'s newly formed big band. Since then Jerry has toured the U.S., Europe, Asia and Australia with Harry and was also part of Connick's Broadway musical production, "Thou Shalt Not" and appeared on stage as well as in the orchestra. Now, thanks to his talent, and long association with Connick, Jerry can be seen daily as part of the “house band” on HARRY, Connick’s new daytime television variety show. HARRY is produced and distributed by NBC Universal and has been sold to 99% of the U.S., including Fox, Sinclair, Hearst, NBC Owned Stations, CBS, Scripps, Tribune and other station groups. The program airs in the coveted 4PM time slot in most markets.

Jerry, a “musician’s musician,” who is also a first class showman in the truest sense of the word, blows his horn with his entire body and delights audiences with his all-in, soulful playing. Depending on the tune, Weldon’s warm fat tenor sound can roll and roar like a thunderstorm or gentle you like a warm summer breeze…and it always, always resonates far beyond the listener’s ear, Whether he’s walkin’ the crowded bar at Showmans in Harlem or wending his way through packed candlelit tables at Birdland in Midtown, Jerry Weldon is a tenor force that cannot be contained. He becomes the music and brings the audience with him on a communal tuneful journey. This mastery of the message, and the medium, has kept Weldon working steady for nearly four decades. Jerry’s latest recording, "On the Move," spent two months on the Jazz Week charts and he at work on a new CD.

When Jerry was fourteen, his jazz fan father took him to see Stan Getz at The Village Vanguard. In that moment, the young saxophonist knew he wanted to have a life in music.

“Then you have to be good,” Jerry Sr. cautioned.

In addition to his daily TV gig, Jerry continues to perform as a bandleader and in-demand sideman at festivals and jazz venues around the world.