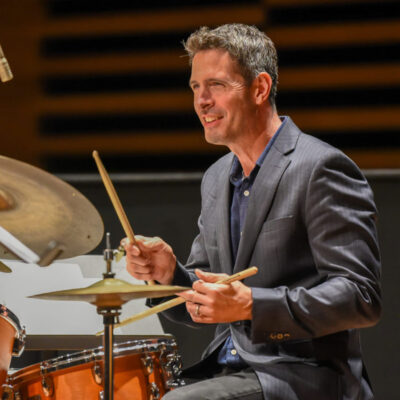 Jason Tiemann is a New York City based jazz drummer, where he maintains a busy schedule as a freelance performer and educator. Admittedly drawing influence from the great(s) Philly Joe Jones, Tony Williams, Elvin Jones and Billy Higgins, Tiemann is quickly forging his musical voice on the New York scene by fusing his depth of historical foundation with crisp technique and propulsive, intuitive swing. Tiemann is currently on the jazz faculty of the Jackie McLean Institute of Jazz at the university of Hartford. Additionally, he has been an artist/clinician for the Jamey Aebersold Summer Jazz Workshops since 1998. Before moving to NYC, he was an active component of the Midwest Jazz community where he was in constant demand throughout the region as a performer and educator and was afforded the opportunity to accompany numerous jazz luminaries. Throughout his career, he has performed and/or recorded with an astonishing array of musicians including, but certainly not limited to, Benny Golson, David Liebman, Harold Mabern, Eric Alexander, Mike LeDonne, Peter Bernstein, Slide Hampton and countless others on the New York scene.