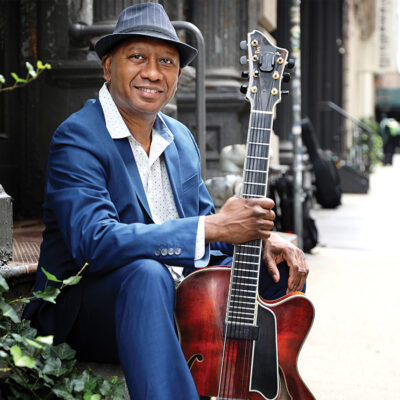 World-renowned, Seven String Jazz Guitarist, composer and arranger, Ron Jackson has performed, recorded, and taught music in over 30 countries. Jackson is likely the only African American seven-string jazz guitarist alive. His goal is to bring awareness to the instrument through education, music, and events. As a musician, Jackson has been featured as a leader in jazz festivals all over the world, including the North Sea Jazz Festival, Edinburgh Jazz Festival, and Winter Jazzfest. His influences include George Benson, Pat Metheny, Jimmy Page, and Jimi Hendrix. He has studied under the tutelage of Pat Martino, Barry Harris, Melvin Sparks, Mike Stern, and the seven-string master, the late Bucky Pizzarelli. As a recording artist, Jackson has had a successful recording career, releasing eight albums. Beginning with the chart-topping "Guitar Thing" (1991), “Flubby Dubby” (2008) which was recorded live with his Hammond Organ trio, and his most recent release, the Jazzweek Top 100 album, "Standards And Other Songs" (2019). His first recording on the seven-string incorporates traditional standards with jazz reimaginings of radio-friendly pop songs, like Drake’s “Passion Fruit”. As an educator, Jackson provides education and awareness of the seven-string guitar. He also teaches six-string guitar classes to elementary students in NYC Schools. These days you can find Ron Jackson performing for audiences with his band, teaching virtually and in-person, and hosting his popular Instagram live show "Sunday Evening Jazz”. In 2022 Ron will be on tour with his “Whatever’s Open” Tour and releasing his new album, Standards and My Songs”