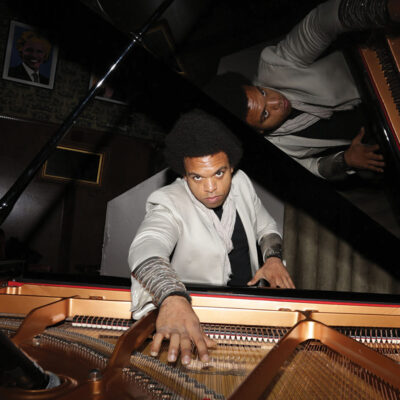 A native of Camden, New Jersey, Eric Lewis began his musical studies at 2 years old and would ultimately receive the Rodger's and Hammerstein full merit scholarship to the Manhattan School of Music. A Dean's List student, upon graduation, he toured the world, recorded and performed with Wynton Marsalis & the Jazz at Lincoln Center Orchestra, Elvin Jones, Cassandra Wilson, Roy Hargrove, and John Hendricks among others. In 1999, Eric won the Thelonious Monk International Piano Competition, at the time, the most coveted prize in all of Jazz.

A decade into his career, he reemerged as ELEW and began fusing his piano techniques with rock guitar-based ideas and experimental prepared piano methods, generating a powerful crossover brand he coined "Rockjazz". Over the course of multiple award winning, critically acclaimed albums, ELEW has re-imagined songs by The Killers, Nirvana, Coldplay and Michael Jackson to name a few. Throughout his career he has built an elite fanbase of some of the most distinguished leaders and celebrities such as Leonardo DiCaprio, Gerard Butler, Barack and Michele Obama, Prince Albert I1, Will Smith, Eli Roth, Al Pacino and the list goes on..

Inspired by the European masters of Baroque Counterpoint, ELEW has innovated the technique of simultaneously executing two independent melodies which precisely detail harmonic forms bursting with idiomatic verisimilitude and wide ranging historical references while flawlessly maintaining the idiosyncratic Afrocentric timing at the core of Jazz improvisation. He has named this technique Counterbop. His album Cubism - ELEW plays Rosenwinkel, a solo piano exploration of contemporary jazz legend Kurt Rosenwinkel provides perspective an insight into the nature of what Counterbop is and how it may be implemented.

In addition to piano performance, appearing in and scoring for film, ELEW is a prominent international DJ. He has has created disco infernos for multiple events such as The World Economic Forum, TED, Art Basel, A-list Oscar parties, the Monte-Carlo Gala, the Cannes Film Festival and multiple celebrity birthdays and weddings. In some cases, ELEW places the turntables within the piano, seamlessly executing transitions and improvisations all while generating a pleasing frenzy on the dance floor. This has lead to him creating yet another brilliant innovation he calls Piano Turntablism. He literally plays two different yet recognizable songs simultaneously as a Dj would but on the Piano. All while maintaining the type of euphoric festival.

ELEW is a genuine master of the piano and artistic genius.