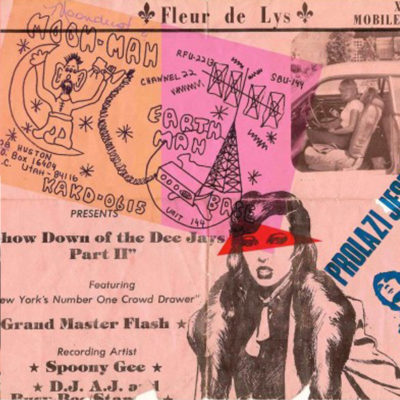 DJ Edan in the Roxy Bar

back to list
EDAN (aka the guy playing 45's while you sip a drink at the bar) happens to be a critically acclaimed dee-jay, emcee, producer and song-writer with a global following. To this point, he's known for his unlikely take on hip-hop culture, where traditional rap songs are often skewed by 60’s rock samples, tape echoes, and foreign language choruses (not to mention the off-beat humor and surrealist imagery incorporated via his lyrics).

Since his debut rapp single saw the light of day in 1999, he has steadily amassed a loyal cult following, despite being fairly indifferent to his own career. Case in point, his most recent release is now six years old... Said release, an audio-visual mega-mix, entitled ‘Echo Party Movie’, is an ambitious pastiche of dusted disco, early rapp, and punk that utilizes everything from turntables to tape echo, glockenspiel to guitar, and moog to kazoo. Once completed, the heady audio collage was then given to celluloid-splicer-extraordinaire, Tom Fitzgerald, who meticulously set the music to a wild array of found footage (sources ranging from Bollywood & martial arts films to subversive 60’s animation, obscure new wave 8mm & vintage breakdance/graff footage).

Edan’s previous effort, “Beauty And The Beat”, drew worldwide acclaim, most notably for its graceful marriage of hip-hop and rock-based psychedelia. Despite being off the beaten track musically, Edan tastefully/cautiously blends these influences into something new, with an emphasis on skills and originality. Keeping in line with said emphasis, the man is a world class deejay and emcee, taking it back to basics yet pushing forward at the same time...

His live performance repertoire includes cutting/looping up records such as Thin Lizzy’s ‘Johnny the Fox’ with one hand while holding the mic with the other and spitting his verse over it in good time, not to mention simultaneously stepping on a delay pedal for the sake of added texture. Having established himself as a force to be reckoned with on stage, Edan has shared billing and toured with the likes of Public Enemy, DJ Shadow, Cut Chemist, Kool Keith and many more…

As a dee-jay, Edan manages to incorporate a wide range of tastes and influences into a single narrative that celebrates warmth, grit, and imagination… Expect to hear anything from 50's rockabilly to early 60's R&B to late 60's soul/funk, garage rock giving way to Turkish (or Persian) psychedelia, roots reggae, on up to late 70's rap & disco, punk & new wave, and back again…