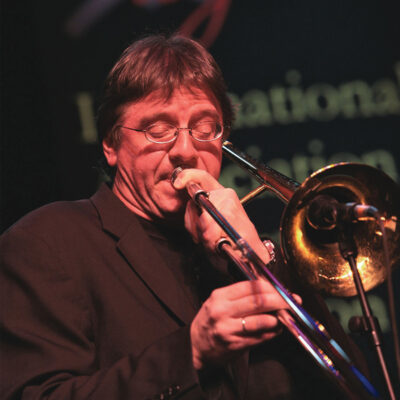 Conrad Herwig presents "The Latin Side of Mingus"

back to list
New York jazz trombonist Conrad Herwig has recorded 25 albums as a leader, receiving four Grammy nominations. He has also been voted #1 Jazz Trombonist three times in the DownBeat “Jazz Critic’s Poll.” and nominated for “Trombonist of the Year” by the Jazz Journalists Association on numerous occasions.

In constant demand as a sideman, Herwig has performed with Joe Henderson, Horace Silver, McCoy Tyner, Max Roach, and Joe Lovano (featured as a soloist on Lovano’s GRAMMY Award winning 52nd St. Themes CD). In the Afro-Caribbean genre he has toured with legends such as Eddie Palmieri, Tito Puente, Paquito D'Rivera, and Michel Camilo. He is a longtime member of the the Mingus Big Band (where he has served as musical director and arranger including on the 2011 GRAMMY- winning Live at the Jazz Standard CD). In other big band settings Herwig has also performed and recorded with Clark Terry, Buddy Rich, Frank Sinatra, Miles Davis & Quincy Jones, and the Gil Evans Orchestra.

All told Herwig has appeared on more than 250 albums in what is now a 40-plus-year career.