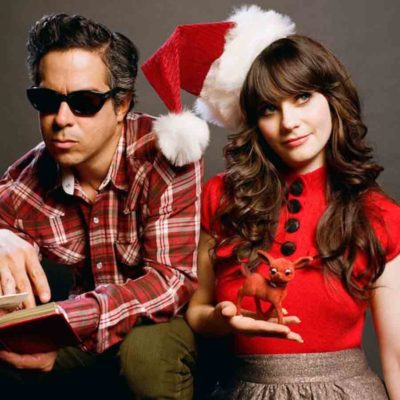 She & Him Christmas Party Live at Kings Theater

back to list
She & Him made their debut record as a love letter to the musicians who inspired it. Volume One (Merge Records) introduces a boy and girl choir hell-bent on making music the old-fashioned way: by hand - and with as few machines as humanly possible.

The She & Him story begins when in 2006 , renowned one man band M. Ward, recorded a duet with a girl named Zooey Deschanel. A delightful recording session, the experience lead to a dialogue between the two about collaborating further. This, in turn, led to Deschanel admitting to secretly making dozens and dozens of home demos and hoarding them like acorns for the winter. Sick and tired of being stingy and secretive about music, Deschanel realized that if songs were acorns then this was indeed her wintertime: she sent the recordings to Ward and these demos became the basis for their first record, entitled Volume One.

Ward's unique arrangements and virtuostic guitar playing paired with Deschanel's affinity for vocal harmony give Volume One its characteristic sound . Ward and Deschanel share a mutual affection for the songs they grew up hearing on Los Angeles radio stations - and keep in their hearts the records that most DJ's aren't playing anymore: Les Paul and Mary Ford, The Ronettes, Nina Simone, Chet Atkins, Linda Ronstadt, the Carter Family and about a hundred others. Aiming to achieve the warmth and charm of pop and country records from the early and mid part of the twentieth century, Ward, who also produced the record, and Deschanel, who wrote most of the music, called upon the help of a number of extraordinary musicians including: Rachel Blumberg, Adam Selzer, Mike Coykendall, Tom Hagerman, Peter Broderick, Mike Mogis, and Paul Brainerd. Without whom this record would just be two people with no drums, bass, strings or pedal steel.

California-raised and Portland-based, M. Ward has released 4 records with Merge, his latest was "Post-War" (2006). He has collaborated with the likes of Neko Case, Conor Oberst, Jim James, Nels Cline, and Jenny Lewis. California based Deschanel spent much of her early life singing in choirs, which is probably why she likes harmonies so much. She also enjoys reading, dancing and playing the piano. She & Him have performed together on occasion over the last year and enjoyed it very much.