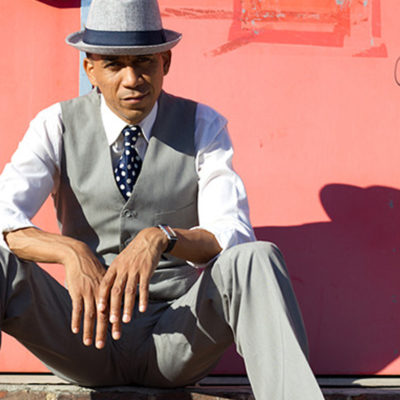 Chino Pons LIVE in The Django

back to list
Singer, bandleader, composer, dancer and record producer Chino Pons is considered one of the leading New York City-based Cuban musicians. In 1997, Chino Pons began working as a band boy with the band Tropical Sound in Miami. In 1998, he moved to New York City to pursue music, performing in the subway and on the streets, then enrolling in Ramon Rodriguez's workshop at the Boys Harbor (El Museo del Barrio). Chino worked with different groups, including Cafe con Crema, Many Puventud and Conjunto Classico (as a band boy). In 2007, he formed Grupo Irek with Hensy Perez, Tosso Hettinger and Heriberto Valentin, and made his first recording as a bandleader with them in 2008. It was during this period that Grupo Irek became one of the best-known and most respected Salsa acts on the New York City circuit, performing alongside the runway at fashion shows, playing regularly at The Socialista Club while it was open; and at Gala events for Sting's Rainforest foundation. Chino also began playing every year at the Vanidades Magazine anniversary party- previously honoring such classic entertainers as Gloria Estefan, Paquito de Rivera, Ruben Blades and Juan Luis Guerra. In 2013, Chino toured in Japan, playing at the Cuban Japan festival. Since then, he has built up quite a following among Japanese fans of Salsa music. Now established in New York City, Chino Pons continues to play regularly in some of the top venues and has toured widely throughout Central and North America. Chino continues to perform live and is currently working on his next album, spreading his unique take on classic Cuban music throughout the world. He recently founded Guanabacoa Records, a record label focusing on traditional Cuban Music.